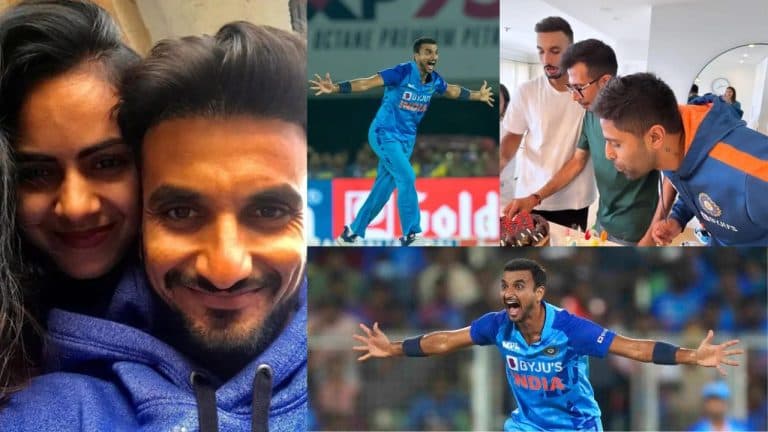 Harshal celebrates his birthday with his wife and team in Auckland

Harshal Patel Birthday Celebrations: The Indian cricket team is currently in Auckland. Where the first match of the ODI series (IND vs NZ ODI 2022) will be played on the 25th. Indian players who reached Auckland on Wednesday first celebrated their birthday here. Harshal Patel celebrated his birthday with his wife and Team India players.

Read more: Indian Captain Rohit Sharma was seen Sweating It Out in The Gym

Harshal celebrates his birthday with his wife and team in Auckland

Patel is not in the ODI squad

Harshal Patel, who made his international debut on November 2021, was born in Sanad, Ahmedabad. He is the captain of the Haryana team at the Ranji Trophy. And is currently in New Zealand with the Indian cricket team. There he involved in the T20I series. Although he is not in the ODI squad. But reached Auckland with the team and his family.

Talking about his 32-year cricket career, he has played 24 International T20 matches so far. He is yet to make his debut in ODIs and Tests. In 24 T20 matches, Harshal has taken 27 wickets with an economy of 9.13.

Under the captaincy of Hardik, the Indian cricket team won the T20 series 1-0. Now India will play the ODI series with New Zealand from 25th, which will be captained by Shikhar Dhawan. The team also includes Deepak Chahar, Kuldeep Sen. Suryakumar Yadav, Yuzvendra Chahal, etc. all those players who are part of the ODI series have reached Auckland.