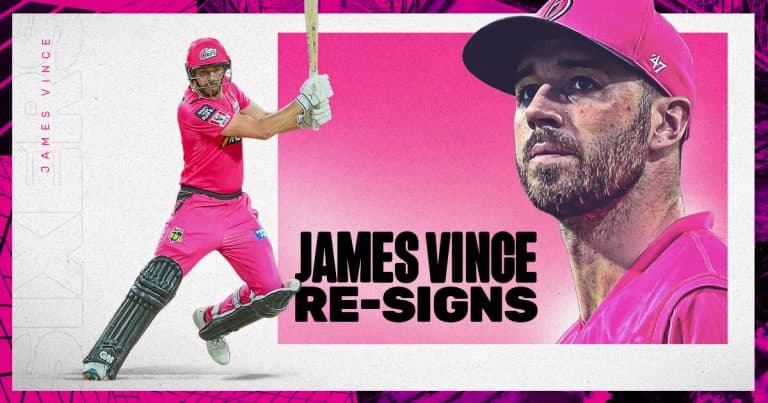 James Vince will return to the Sydney Sixers for the upcoming edition of the Big Bash League. The franchise confirmed this on Tuesday (August 31). James Vince, who scored a total of 537 runs in the Sixers’ winning campaign last year. His goal is to help his team win a hat-trick of the title.

The signing is a massive boost for the franchise that acquired Carlos Brathwaite earlier this month. James Vince was part of a great opening partnership with Josh Phillip last year. In which both the batsmen were only behind Alex Hales in the run charts.

James Vince scored an unbeaten 98 in the first qualifier against Perth Scorchers. And then scored a total of 95 runs in the final against the same opposition. The franchise will be wary of the fact that if the batsman is called back in the Test squad for the Ashes series. So he could miss the whole tournament this year. If he is selected in the England Lions squad to face Australia A before the Test. So James Vince will not be able to play at least the first three matches of the BBL season.

The Sixers, who also tied head coach Greg Shippard to a new deal shortly before. revealed that Vince turned down some lucrative offers from rival teams before committing himself to another season with the champion.

“I don’t play for personal praise or awards, I play to be part of a winning team,” Vince said. “What the Sixers have built on and off the field over the years is something truly special and I am proud to be a part of it. Shippy (head coach Greg Shippard) creates an environment in which we can all thrive and we all can We are inspired to do our bit for the team and our members and fans.

James Vince Furious to Drop the Catches of Scorchers:

“What was our first visit there all year, to experience that final season at the SCG. There was something I’ll never forget. When the Scorchers dropped a catch the place erupted and it was the loudest noise. I ever heard that on the cricket field. The fans were unbelievable. How come you don’t want to come back for more than this?”