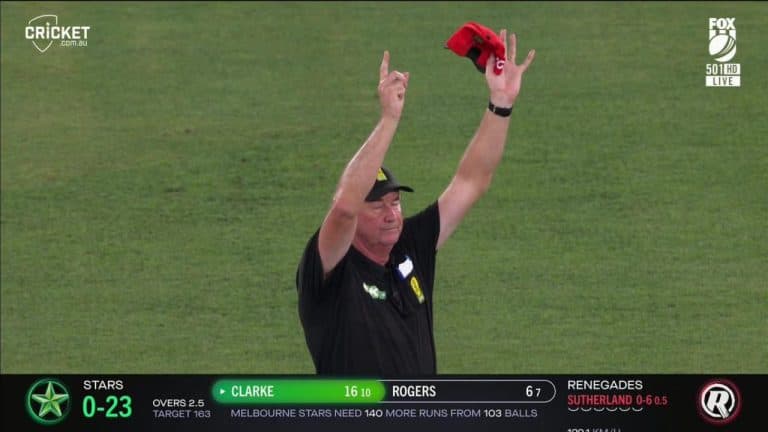 BBL: Ball did not cross boundary, yet umpire gave a six, watch video and know the reason

A strange incident happened on Saturday in the Big Bash League. When the batsman hits the ball. The ball didn’t even go outside the 30-yard circle, but the umpire signaled a six. The incident took place during the match played between Melbourne Renegades and Melbourne Stars.

In the 12th season of BBL, Melbourne Renegades batting first scored 162 runs in 20 overs. Chasing the target of 163 runs, the team of Melbourne Stars could score only 156 runs and lost the match by 6 runs.

During the match Joe Clarke of the Melbourne Stars played a shot that didn’t even cross the 30 yard circle and fell to the leg umpire. Despite this, the umpire signaled 6 runs.

The stadium is covered from above :-

Actually, the stadium of Docklands built in Melbourne is completely covered from above. Here no match can be stopped due to rain or strong wind or sun. Many matches are played on this ground in the Big Bash League.

If the batsman hits the ball on the roof, he gets 6 runs. The same happened with Joe Clark. Joe Clarke hit the shot and the ball reached the roof of the stadium. So he got six runs.

Sam Harper scored a half-century for Melbourne Renegades. Apart from this, Jonathan Wells scored an inning of 44 runs for Renegades. Due to the innings of both, the team was helped to cross 160 runs. Chasing the target of 163 runs, the Melbourne Stars got off to a great start.

Also Read:- India Return Suryakumar And Jadeja For T20 in The Squad For Australian Test