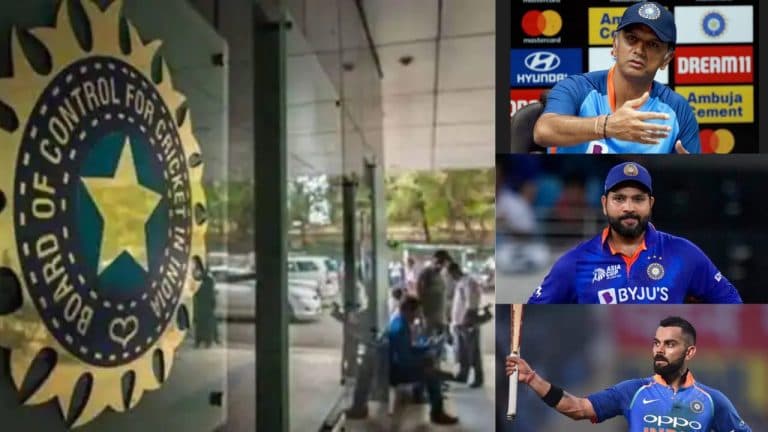 India in T20 WC: The Board of Control for Cricket in India (BCCI) is extremely shocked and annoyed with India’s performance in the T20 World Cup. Top BCCI official has confirmed that they have called a meeting to review the performance. BCCI coach Rahul Dravid, captain Rohit Sharma and former captain Virat Kohli will be called for the meeting. The meeting will be called by the BCCI secretary and the disastrous performance of the Indian team will also be reviewed.

Read more: PAK vs ENG Final: Shaheen Afridi challenges England batsmen, says- scoring runs against me will not be easy

BCCI is fully shocked by the Indian Team

“We are calling them for a meeting. We are shocked by what happened in the semi-finals, obviously, a change is needed. But no decision will be taken without hearing their side. Rohit, Rahul, Virat’s inputs will be taken and future course of action will be taken for the Indian T20 team”, a top BCCI official confirmed to InsideSport.

The BCCI is also not happy with the performance of the Chetan Sharma-led selection committee. His performance will also be reviewed and of course, Chetan is set to be replaced.

It is not clear whether the chairman of the selection committee has also been called for the performance review meeting.

Read more: T20 World Cup: Harbhajan advised to change coach in T20, said- IPL champion should get a chance instead of Rahul Dravid

The next T20 World Cup will be held in the West Indies and USA in 2024. The BCCI is of the view that most of the elders in the team will themselves be phased out.

“We are not concerned about individuals. They are able to take their calls. We are concerned about Indian cricket, Team India. What happened against England and what is happening in the knockouts should stop. How to end this knockout rot. All our decisions will be made with this in mind.

The average age of the Indian team was 30.6-

Hardik Pandya is leading the team in the three-match T20I series in New Zealand next week. He is likely to be groomed as India’s next captain in the shortest format.