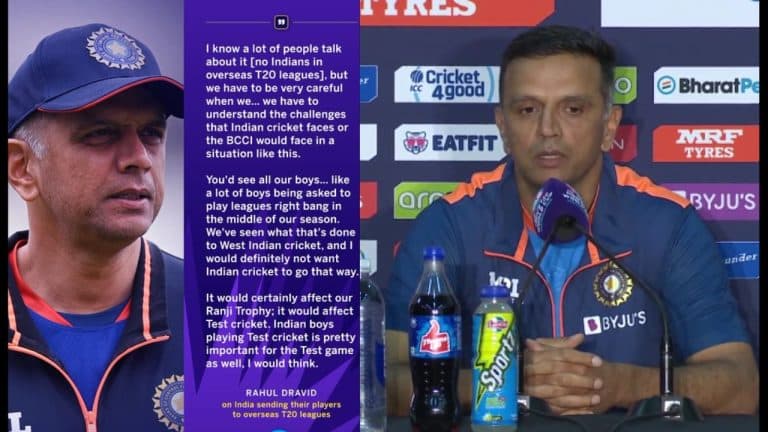 Another flop show recorded in coach Rahul Dravid’s report card, BCCI will review the performance after the Australia series.

Facing some serious scrutiny as the coach:-

One of the legends of Indian cricket, Rahul Dravid is facing some serious scrutiny after a year as a coach. India’s journey in the ICC T20 World Cup 2022 has ended with yet another defeat.

Also read:- Ajay Jadeja Said “I will Say One Thing Which will Sting If Rohit Sharma Listens”

The Men in Blue, led by Rohit Sharma, lost in the semi-final against England (IND vs ENG) by 10 wickets in Adelaide.

And with this, his journey in the tournament has also ended. At the same time, Dravid has failed to win the team for a year as a coach.

The only Test in England, South Africa has lost both the ODI and Test series. As questions arose, the BCCI is set to review Dravid’s performance after the Australia series.

Dravid was appointed as coach by BCCI:-

India have yet to win an ICC trophy since their success in the 2013 Champions Trophy. Dravid was appointed as the coach by the BCCI for Team India’s one-of-a-kind victory.

But the former captain has failed to deliver on the promised success. Let us tell you that Dravid – India’s costliest coach on contract at Rs 10 crore per year – is under pressure. When the new Cricket Advisory Committee comes up next month, he will sit with Dravid and prepare the blueprint for the next two World Cups.

A senior BCCI official told Sport, “Yes, some tough calls have to be taken. It is the end of a cycle and so is the case with failures or successes.

The turnaround of the T20 World Cup is short. As far as Dravid is concerned, we have time till the Australia series. Once the new CAC is in place, we will consult and take a decision. But around the 2023 World Cup, don’t think it is the right call.”

While India has had considerable success in the bilateral series under Rahul Dravid, most of the victories have come against the lower-ranked teams in the ICC rankings.

The Men in Blue won victories over Sri Lanka and New Zealand at home, as well as the Kiwis who lost a match against India last year.

India for the most part is doing well on the home track:-

While India played a lot of T20 matches in the schedule, India has been doing well on the home track for the most part. India has had success at home against South Africa, Australia, New Zealand, West Indies, and Sri Lanka.

Rahul Dravid’s biggest achievement away from home is winning the T20 and ODI series against England and West Indies. But nobody prepared him for the situation in Australia.

In the Asia Cup, where India started as favorites, Rohit Sharma & Co suffered a humiliating defeat by being knocked out in the Super 4 stage. Sri Lanka and Pakistan reached the final, the latter defeating India in a match in Dubai.

In the T20 World Cup, India had to put all its might to defeat Pakistan and Bangladesh. Against a strong South Africa, India suffered.

Ashwin, considered a match-up for David Miller, was no match in the challenging conditions in Perth.