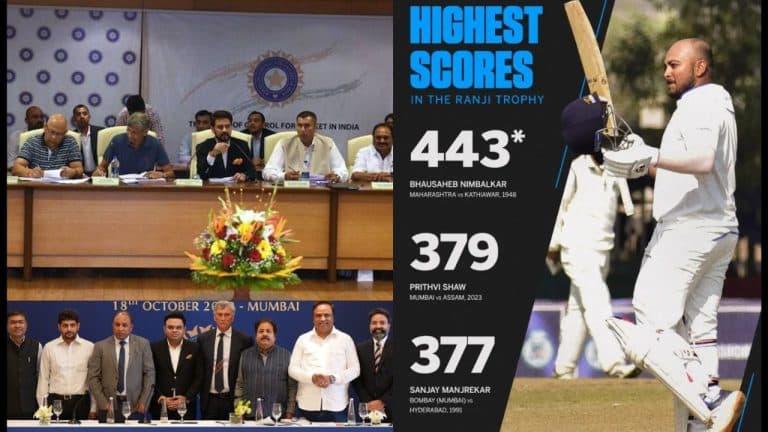 IND vs NZ Squad 2023: BCCI selector said on Prithvi Shaw’s triple century, who should replace him in the team. The new selectors appointed by the BCCI are ready to pick India’s squad for the New Zealand series (India Squad vs NZ).

Prithvi Shaw is knocking loudly on the door of the selection committee. The Mumbai batsman has scored the second-highest individual score in Ranji Trophy history.

Prithvi has become the highest individual scorer for Mumbai in Ranji history, however Shaw is not getting a chance in Team India despite his consistent performances.

The selector said on the condition of anonymity:-

“Tell me, how do we replace him and in whose place,” said a newly picked selector on condition of anonymity. Should Ishan Kishan, Shubman Gill, Rohit Sharma be dropped in ODIs?

In T20 again there is a lot of competition for places at this stage. But his name will definitely be discussed.”

Prithvi Shaw had a chance to score the highest individual score in the Ranji Trophy in this match, but he missed it.

The highest individual score in Ranji Trophy history is 443, made by Nimbalkar against Kathiawad in 1948–49 while playing for Maharashtra.

Will Prithvi Shaw be selected?

Gambhir came out in support of the Mumbai opener:-

Gautam Gambhir backed the Mumbai opener, saying, “Yes, you have to look at upbringing as well. Where does he come from and what are the challenges before him. It makes even more sense for the management and selectors to keep him in the mix and help guide him on the right track.”

Shaw played his last international match in July 2021, and since then he has not been given a chance in the team.

Talking about Shaw’s international career, he scored 42 in five Test matches. Has scored 339 runs at an average of 38, including 1 century and 2 half-centuries.

Whereas Shaw scored 31 in 6 ODIs. Has scored 189 runs at an average of 5. Shaw put on 123 for the first wicket with Musheer Khan against Assam.