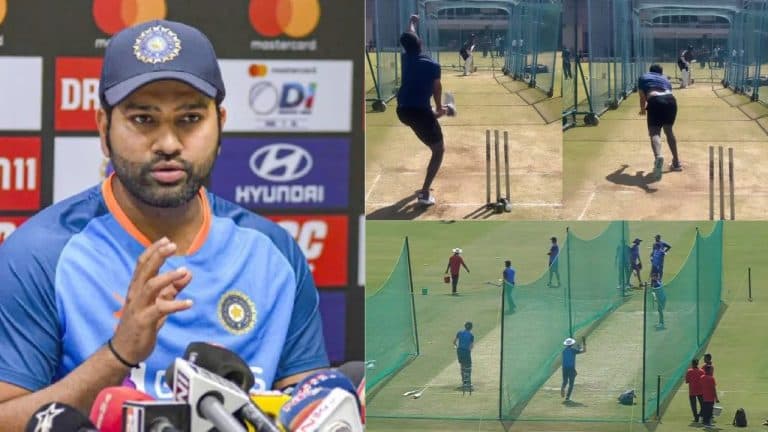 Bumrah Fitness: Rohit hopes Bumrah may be available for the last two Tests of the Border-Gavaskar Trophy

Bumrah Fitness: India skipper Rohit Sharma warned against bringing Jasprit back into international action from his back injury. Rohit also expressed hope that the pacer would recover sufficiently to be available for the last two Tests of the four-match Border-Gavaskar Trophy in March.

Read more: Sarfaraz ends silence on Surya’s Test selection over him for IND vs AUS

Named in India’s ODI squad for the Sri Lanka series

The 29-year-old Bumrah was named in India’s ODI squad for the Sri Lanka series earlier this month. But his comeback from a long injury layoff was delayed by a last-minute precautionary withdrawal. The fast bowler missed the 2022 Asia Cup and the subsequent T20 World Cup in Australia due to a back problem. With the home ODI World Cup slated for later in the year. The Indian management has been very cautious about Bumrah’s fitness.

“About Bumrah, I am not sure at the moment, certainly he will not be available for the first two Tests,” Rohit said on Tuesday (January 24) after India’s 3-0 clean sweep in the ODI series. Will happen.” No. 1 rank New Zealand.

“I am hoping, not hoping but hoping that he plays the next two Tests. But again we don’t want to take any chances with him. Back injuries are always serious. We’ve got a lot of cricket after that.” is about to come.” Well, we’ll see, and we’ll monitor. We are in constant touch with the doctors and physios at NCA and we are constantly hearing from them.”

Bumrah has been out of action since last September following a stress reaction in his back ahead of the Asia Cup. He was undergoing rehab at the NCA in Bengaluru, where he resumed training in late November after six weeks of rest and returned to bowling three weeks later in mid-December.