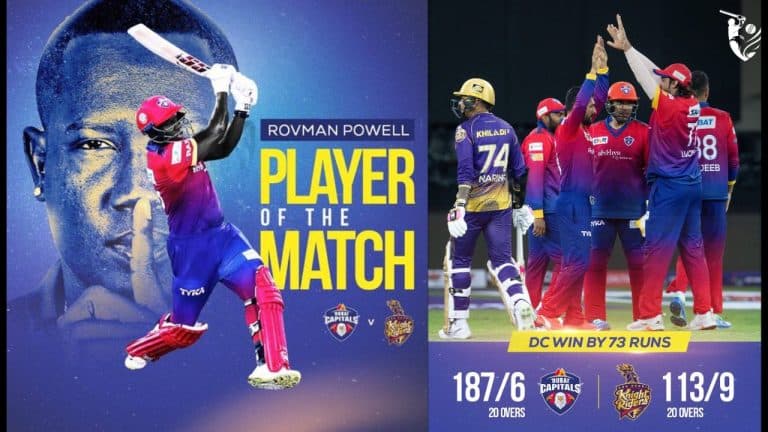 Powell’s mission to win the opener was well supported by opener Robin Uthappa (43) and openers Joe Root and Sikandar Raza scoring 26-26 each to put up an impressive 187 for 6.

Powell (2 for 15) and Akif Raja 2 for 2) and Mujeeb ur Rehman (2 for 16) restricted Abu Dhabi Riders to 114 for 9 in 20 overs. Root’s four catches were another highlight of Dubai Capitals’ stupendous win.

Uthappa, opening the innings with Root, added 35 runs for the first wicket. Root was the first to fall at the hands of Ali Khan, a right-arm medium pacer from the United States.

At the half-way mark, Dubai Capitals were 62 for 2, with skipper Rovman Powell joining Uthappa.

Captain Naren, who bowled the 12th over, was hit by Uthappa for a six over mid-wicket but Naren bowled him on the last ball. Uthappa scored 43 runs in 33 balls with the help of three fours and two sixes.

After this the Powell Show started. He dismissed the brought-back Ali Khan for 21 runs in the 13th over which included two sixes. At the end of the 15th over, the score of Dubai Capitals was 120 runs for 3 wickets.

Naren bowled the 16th over and gave only five runs. Powell hit Rampaul’s first ball for a six over deep point and also hit a four on the third ball.
He was dismissed on the fifth ball by Colin Ingram at deep midwicket after scoring 48 runs in 29 balls with the help of three fours and three sixes. Sikandar Raza played a quick inning of 26 runs.

The DP World ILT20 made its debut on 13 January 2023 at the Dubai International Stadium. Some of the greatest cricket superstars have been made. Their way to UAE to play in the inaugural edition of the league.

The tournament will be played in a 34-match format across the UAE’s exemplary, world-class cricket facilities in Dubai, Abu Dhabi and Sharjah.

Read more:-  Australia’s Peter Handscomb will be Fit Enough To Travel To India After Recovering From An Injury