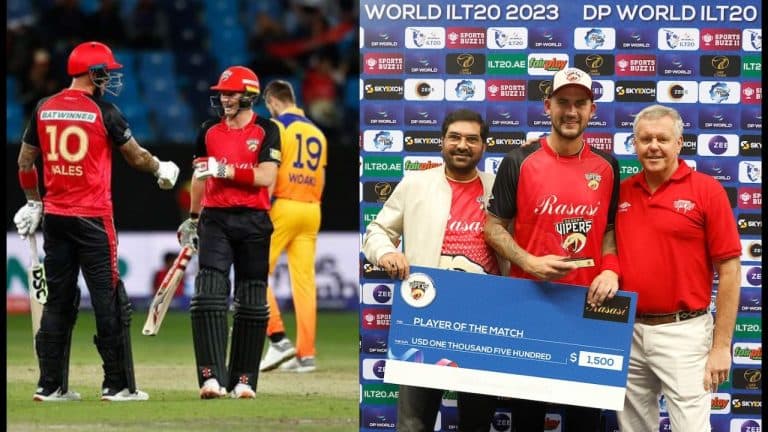 DP World ILT20 2023: Alex Hales and Sam Billings give Desert Vipers an emphatic winning start. Hales came through his series of devastating shots, hitting an unbeaten 83 off 52 balls with the help of nine fours and three sixes.

Billings hit four fours and a six off 38 balls:-

Sam Billings scored 49 runs off 38 balls with the help of four fours and a six, giving a strong seven-seven to the Desert Vipers.

wicket victory over Sharjah Warriors in the fourth match of the DP World ILT20 at the Dubai International Stadium on Sunday night. The England pair shared a 128-run partnership in 14 overs to win the match with 20 balls to spare.

Desert Vipers showcased their bowling and batting prowess to give their opponents a tough fight in their opening match to crush Sharjah Warriors for their second consecutive defeat.

Put Sharjah Warriors out to bat

Earlier, Desert Vipers won the toss and put Sharjah Warriors in to bat and restricted them to 145 for 5 in 20 overs.

In the first over of the match, Sharjah opener Rahmanullah Gurbaz hit a six over the wicketkeeper on the fifth ball of Sheldon Cottrell.

In the third over, opener Evin Lewis, going for a pull, was caught by Tymal Mills at short fine leg off Cottrell for a duck.

Gurbaj, who hit Cottrell for his second six, fell to Gus Atkinson in the fourth over. He tried to hit mid-wicket but mistimed it and was caught high by wicketkeeper Sam Billings for 22.

Atkinson would have also got the wicket of Dawid Malan in the same over if Sherfane Rutherford had not dropped a simple catch at backward point.

Tom-Kohler Cadmore hits Tom Curran over backward square for a boundary, but is dismissed for 6 by UAE’s Rohan Mustafa.

Three wickets fell for 38 runs in 5.3 overs. With captain Moeen Ali Malan coming in and hitting a boundary each in the eighth over.

al Mills caught for 18 by Tom Curran who took a brilliant running catch.

Joe Denly, the top scorer for Sharjah Warriors. Commented during the press conference that “we were short by a few runs.

We had to rebuild after losing four-five wickets early in our innings. We could not get much momentum in the middle overs and put their bowlers under pressure.