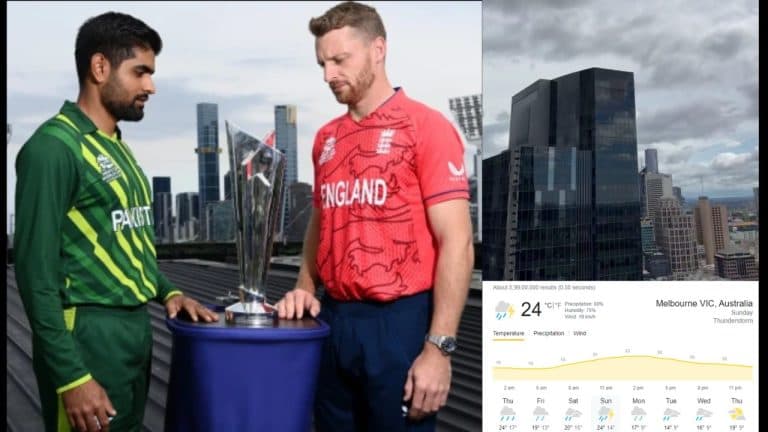 ENG vs PAK Final: The Dark Clouds Hovering Over The Final Between Pak And Eng in Melbourne

ENG vs PAK Final 2022: The Dark Clouds Hovering Over The Final Between Pak And Eng in Melbourne. It is raining in Melbourne at the moment but dark clouds are hovering over the whole city.

This inclement weather has put the T20 World Cup final between Pakistan and England to be held today (Pak vs Eng) in jeopardy.

Australia’s Bureau of Meteorology has predicted an 80-90% chance of non-stop rain starting at 5:30 p.m. local time. This means that the final match can be transferred to the reserve day on Monday.

On reserve days, a 3 pm (local time) slot has been allotted with an additional two hours to complete the game.

But the gloom may continue on a backup day as the meteorological department has predicted a 95 percent chance of rain (5 to 10 mm) on Monday.

Let us tell you that the England cricket team has reached the final after defeating India in the semi-finals and Pakistan defeating New Zealand. The final match will be played on Sunday from 1 pm Indian time.

There will be a toss at 1 pm and the first ball will be bowled at 1.30 pm. The weather is not at all favorable for the match, there is a high chance of rain right now on the day of the match. There may be some changes in this, which you will find continuously updated here.

The Chances of rain in Melbourne on Friday and Saturday are very less, negligible but it is more likely on the match day i.e. 13th.

Very little chance of rain in Melbourne on Sunday and Monday:-

The final match may get washed away in the rain, but let us tell you that the reserve day has been fixed for the final match.

Explains the rules and timing of its implementation. But before that, see how the weather is in Melbourne on 13 November.

Updated on 13 November: According to what the Meteorological Department is saying now, there is a 60 percent chance of rain on the match day.

There is a 57 percent chance of rain at the time the match is scheduling to start. Winds are forecast to blowing at a speed of 16 kmph.

Chances of rain on Reserve Day as well: According to the Meteorological Department, there is a possibility of rain on Monday as well. On this day there is an 80 percent chance that it will rain.

The Reserve day schedule and rules:-

If the match is stopping due to rain and goes on the reserve day, then it will be played on the next day i.e. 14 November. According to Indian time, the match will start at 9.30 am on Reserve Day. If the reserve day is also washing out. both teams will be declaring joint winners.

New rule: The Duckworth-Lewis rule applies in all World Cup matches. If the other team has played 5 overs. But now it has been increased to 10 overs.