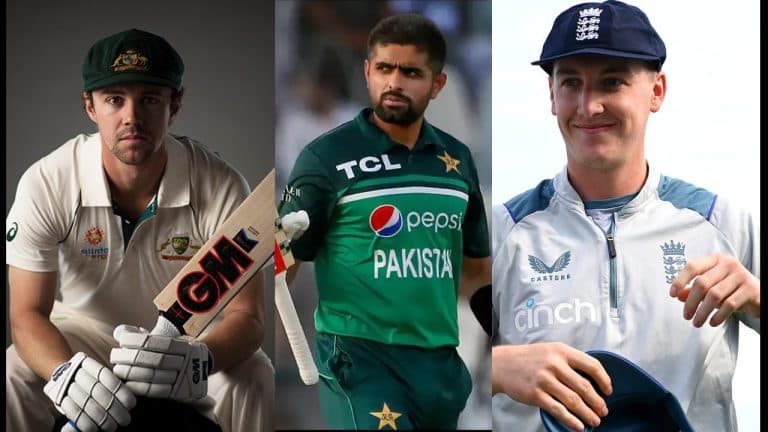 ICC Men’s Player Of The Month Nominees For December 2022

The nominees for the ICC Men’s Player of the Month for December 2022 have been revealed. Three nations are represented in the shortlist for the award, as batting supreme.

The Pakistan skipper continues to enjoy fine form with bat in hand, filling his boots against England and starting the New Zealand series.

Also read:- Matt Henry is out of ODIs against Pakistan, and India due to an abdominal strain

Scoring runs in all four Tests he played, Babar demonstrated his consistency even with the burden of captaincy, scoring a pair of centuries and three fifties in eight innings.

The month began with his 136 on the third day of the First Test in Rawalpindi, in which he hit 19 fours and a six to help his team reach 579.

He scored three half-centuries in four innings in the second and third Tests at Multan and Karachi. respectively, finishing with 348 runs at 58 for the series.

Given license to attack in the middle order, Harry Brook enjoyed a fine first year of Test cricket, helping England to a famous Test series victory in Pakistan.

Brook scored centuries in all three of England’s victories on the tour. Scoring 468 runs at an astonishing average of 93.60 throughout December.

The first Test in Rawalpindi was only the second of the 23-year-old’s career. Although the right-hander’s active, assertive approach made him a seasoned campaigner.

Batting in a similar attacking manner to Brook. Travis Head has shown a knack for expediting proceedings, with his work at No. 5 in the order appearing in the ICC Men’s MRF Tires Player Rankings, where he is ranked fourth. Sits.

In Australia’s four Tests played over a month, Head scored 455 runs at an average of 91 with one century. As well as taking two wickets in the team’s first Test victory over the West Indies.