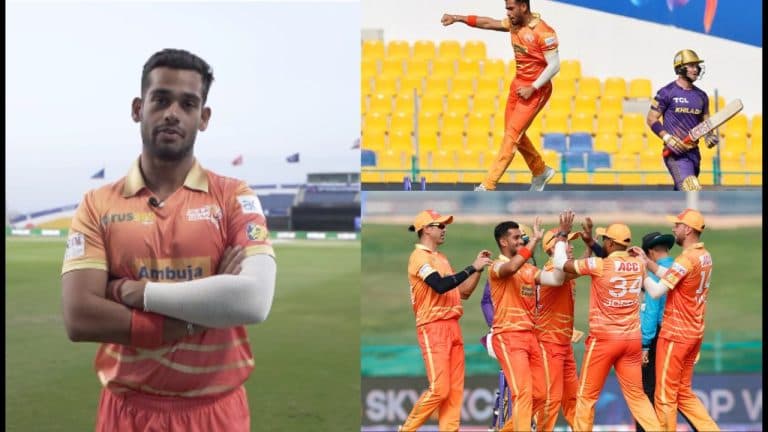 UAE’s Sanchit Sharma talks about his brilliant bowling spell that earned him the Player of the Match performance in @GulfGiants’ stupendous win over ADKR.

Whenever Sanchit Sharma allowed himself to daydream about playing T20 franchise cricket in front of a global TV audience for the first time, it could have happened exactly as it did on Sunday.

The 21-year-old pacer from Ajman took three wickets for nine wickets after opening the bowling for the Gulf Giants against Abu Dhabi Knight Riders in the International League T20.

He was on a hat-trick in his third over at the Zayed Cricket Stadium. This set his new side on the way to an impressive six-wicket victory, after which he received a trophy and a check for $1,500 as player of the match.

So Perfect debut? Almost, but not quite, he said:-

After the game, Sharma joked, “If I had bowled the fourth over, it could have been much better.” After all, he was one over shy of his full allotment.

“I’m really happy,” he said. “It was the start of the dreams. The three wickets really set the game up for us.”

He was told he would be in the starting line-up the day before by former England coach Andy Flower, who is in charge at the Giants.

Sharma said, “I was passing by the hotel and happened to see him.”

“He said, ‘Sit down, Sanchit. You’ll be playing tomorrow’. I was happy, thinking something good was going to happen, but really nervous.

Waseem has since become the star of the shorter format:-

“I imagined what was going to happen, both individually and in terms of team performance, and it was almost exactly what I thought.”

Sharma and Wasim made their debut for the national team in the same series in October 2021. While Waseem has since become the star of the shorter formats, Sharma has endured a disappointing spell on the sidelines.

He was not added to that solitary appearance against Ireland after being forced out of the game after being seriously injured in a car accident during Diwali.

Now he’s back, and he’s looking to get back in contention for national duty through his performances for the Gulf Giants.

Read more:- Rishabh Pant’s Sister Posted For The First Time After The Accident

Sharma said, ‘It has been disappointing. “I made my debut in 2021, then unfortunately had an accident. After that I was sidelined. I have always been in and out with the reserves for the T20 World Cup.

“I was waiting for that breakthrough point. By the end of this tournament, I want to be back in the team, and forever.”