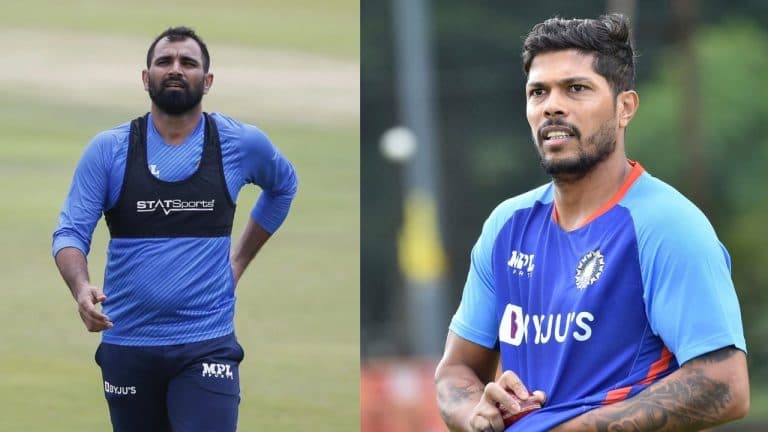 IND vs AUS T20Is: Mohammed Shami has been Ruled Out Of The T20I Series Due To COVID-19

The 34-year-old returned to India’s T20I setup after a hiatus of more than three years, last playing the shortest format against Australia in February 2019.

Umesh has represented India in only seven matches:-

Yadav has represented India in only seven matches but has been a consistent bowler in the India Premier League (IPL).

In the most recent edition, he took 16 wickets in 12 matches at an economy of 7.06 and was a threat, especially in the powerplays with his pace.

Most recently, he was the leading wicket-taker for Middlesex in the Royal London Cup with 16 wickets in seven matches.

His tenure was cut short due to a quad injury but the fast bowler is now set to play his first white-ball match for India in more than three years.

Who himself was ready for T20I comeback:-

The COVID-19 infection comes at the worst possible time for Shami, who himself was set for a T20I comeback. The 32-year-old has not been a part of the T20I setup since the last T20 World Cup in the United Arab Emirates.

When India announced their squad for the upcoming marquee event in Australia, it was sending to standby.

Despite being out of favor for India in the shortest format, he was making a comeback after a stellar IPL with Gujarat Titans, for whom he scalped 20 wickets in 16 matches in their title-winning campaign.

Three-match series T20 World Cup for both the teams:-

The three-match series between India and Australia will be crucial for both the teams to test themselves as the T20 World Cup inches closer.

The hosts were actually naming a similar team that is setting to fly to Down Under for the tournament next month.

Australia, on the other hand, will be without the services of Mitchell Starc, Mitchell Marsh, and Marcus Stoinis due to injuries, but they are expecting to recover in time for the marquee event. All eyes will be on Tim David, who will be calling up to the Australian squad ahead of the World Cup.

The T20 series will begin in Mohali on 20 September and will take place in Nagpur on 23 September. The final T20 match will be playing on 25 September in Hyderabad.