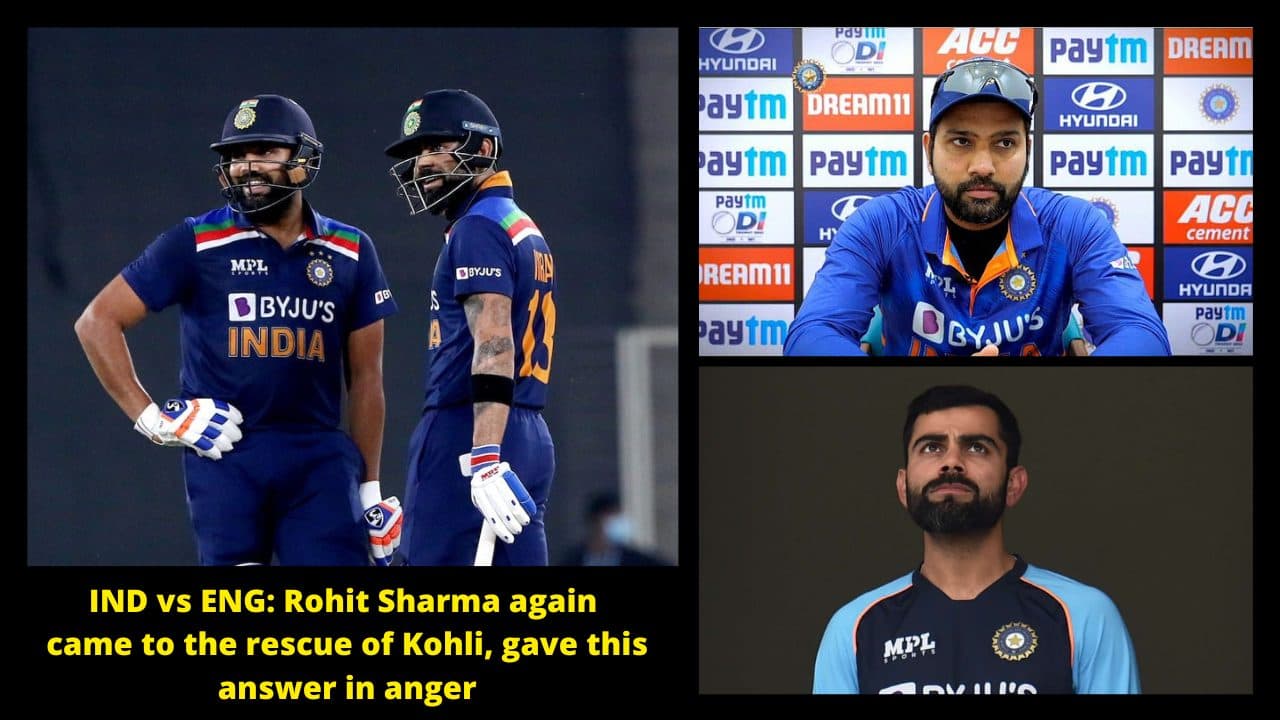 IND vs ENG: Rohit Sharma again came to the rescue of Kohli, gave this answer in anger

IND vs ENG, 2nd ODI: The Indian team lost the 2nd ODI against England by 100 runs at Lord’s. Team India’s top four batsmen failed in this match. After him the lower order also did not play big innings.

Virat Kohli got out for 16 and Shikhar Dhawan scored nine runs. Captain Rohit Sharma and Rishabh Pant could not open the account. Kohli is being criticized for failing again. At the same time, Rohit once again defended him.

The question asked to Rohit about Virat’s form in the press conference :-

Rohit was questioned about Virat’s form in the post-match press conference. At first he got angry, then he calmly replied.

He was asked that there is a constant discussion about Virat’s form, to which Rohit immediately said, “Why is this happening? I don’t understand brother. Virat Kohli has played many matches. He has been playing for many years. Very good batsmen too. They don’t need any assurances.

Rohit said, “Form keeps going up and down” :-

Rohit further said, “I had also said in the last press conference that the form keeps going up and down. This happens in every player’s career. He has won many matches for the team.

In such a situation, he just needs one or two matches to get into form. ”Virat Kohli did not play in the first ODI. He had to stay out due to groin problem.

Earlier, Kohli had played two T20Is against England at Birmingham and Trent Bridge, but failed to score big both times. He had scored another 11 runs. The third and final ODI of the ODI series will take place on Sunday (17 July) at Old Trafford, Manchester. There Virat can play big.

After bowling out England for 110 runs in the first ODI, Team India bowled brilliantly in the second match as well. After winning the toss, Rohit Sharma decided to bowl. The entire team of England reduced to 246 runs in 49 overs.

Moeen Ali scored 47 runs for him. Chahal took four wickets for India. Hardik Pandya and Jasprit Bumrah took two wickets each. Mohammed Shami and the famous Krishna got one success each.

This effort of the bowlers ruined by the batsmen. Team India reduced to 146 runs in 38.5 overs. Six batsmen could not touch the double figure. Ravindra Jadeja and Hardik Pandya scored 29-29 runs. Suryakumar Yadav scored 27 and Mohammed Shami scored 23 runs.

Virat Kohli got out after scoring 16 runs. Shikhar Dhawan scored nine, Yuzvendra Chahal made three and Jasprit Bumrah scored two not out. Rohit Sharma, Rishabh Pant and famous Krishna could not open the account. Reece Topley took six wickets for 24 runs for England.