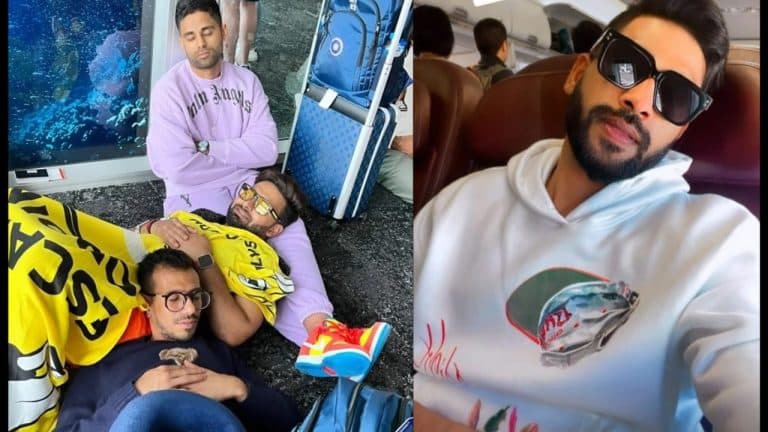 IND vs NZ T20 2022: Indian cricket team seen sleeping at the airport. After the Cricket World Cup, India is making its first tour of New Zealand, for which players playing many World Cups have to leave Australia.

Those Players (Squad) include:-

Suryakumar Yadav, Yuzvendra Chahal, and Rishabh Pant are among those players.

Also read:- ENG vs PAK Final 2022: Babar And Jos Buttler Spoke in the Press Conference Before The Match

Who has to play the T20 series in New Zealand and was in Australia for the World Cup? All three were leaving for New Zealand but were offloaded after boarding the plane.

Suryakumar Yadav has had a stellar run in the T20 World Cup as he is among the nine players to be nominated for the Player of the Tournament. Virat was also included in this list.

Virat Kohli has returned to India after the end of the World Cup tour. He reached Mumbai airport on Saturday morning, while the players who have to play the T20 series against New Zealand will leave for New Zealand.

Chahal didn’t get a chance to play a match in the entire World Cup:-

IND vs NZ T20 2022: Yuzvendra Chahal’s wife Dhanashree was also in Australia with her husband. However, Chahal did not get a chance to play a match in the entire World Cup, which was also criticized a lot.

England won by 10 wickets and made it to the final. Chahal’s wife shared a photo of the airport leaving Australia.

Suryakumar Yadav is seen lying with Rishabh Pant and her husband (Yuzvendra Chahal).

He was dropping off after boarding the plane, actually, the reason behind it was bad weather. Not only the players but everyone on the flight was offloading as the flight could not take off on time due to bad weather. The weather was not suitable for the flight to take off.

Mohammad Siraj shared a picture from a plane going to New Zealand. Siraj was also in Australia. Siraj is including in the squad on the New Zealand tour.