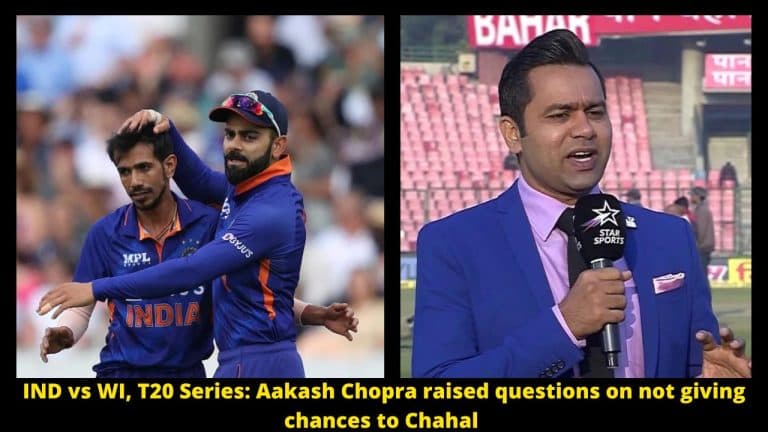 IND vs WI T20 Series: BCCI has announced an 18-member Indian team for the five-match T20I series against West Indies. However, players like Virat Kohli, Jasprit Bumrah and Yuzvendra Chahal have been rested in this team.

IND vs WI: There was a ruckus over the decision to rest Virat Kohli.

There has been an uproar over the decision to rest Virat Kohli, while Bumrah has been rested as part of workload management. At the same time, the veterans were surprised by Chahal’s name not being in the T20 team.

IND vs WI: This question arose after giving rest to Chahal :-

After giving rest to Chahal, questions are being raised whether he is in the plans of T20 World Cup to be held in Australia or not? Earlier, Chahal was out of the T20 World Cup team played in UAE in 2021 on one occasion and this time too a similar atmosphere is being created.

Aakash Chopra said this about Chahal :-

Questioning the lack of T20I opportunities for Yuzvendra Chahal, former India cricketer Aakash Chopra has pointed out how the veteran spinner played only 2 T20Is against England and only one match against Ireland.

Aakash Chopra said, “Yuji Chahal – this is another incredible story. There is no doubt that Yuzvendra Chahal is your best white-ball spinner and yet you didn’t keep him in the T20 World Cup – first mistake.”

Also Read:- Shabash Mithu Review: Mithali’s journey and the many roadblocks that she faced in her career

Chopra said in a video on the YouTube channel, “Now I also feel that you are giving him a chance to play in the ODI series; but not in the T20 against West Indies. Here also he played only two matches in the T20 series, Ireland. I only played one match.”

Yuzvendra Chahal took 4 wickets in the second ODI against England while performing with the ball. Chopra called him “India’s best white-ball spinner” on his outstanding performance at the Lord’s Cricket Ground.