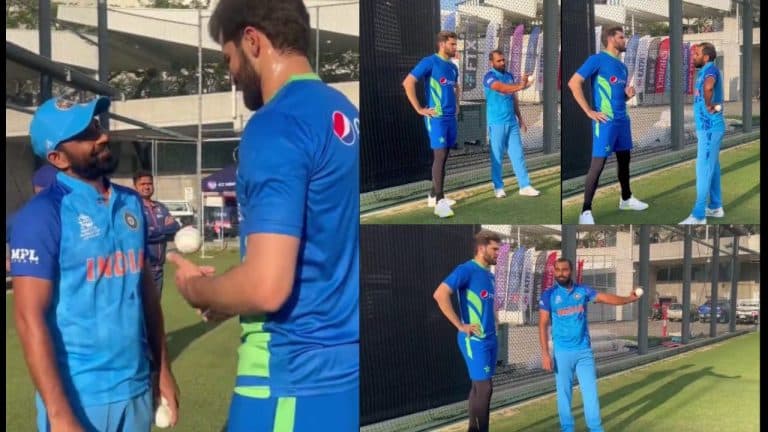 As India Pacer Mohammed Shami was seen sharing tips with Shaheen Shah Afridi, the straight seam has been the standout feature in Mohammed Shami’s bowling courtesy of his wrist position.

Afridi is also a big fan of Shami’s bowling:-

In a video posting by the Pakistan Cricket Board (PCB). India pacer Mohammed Shami can be seen sharing tips with Shaheen Shah Afridi.

Shaheen, who is making a comeback after a long injury, greeted Shami on the sidelines of the net session at the Gabba. He said: “How are you Shami Bhai.”

A big fan of straight seams:-

“I’ve been following you ever since I started bowling and since then I’ve been a big fan of your wrist position and straight seam,” Shaheen said.

The Returning after being out for a month:-

Shami has joined Team India in place of injured Jasprit Bumrah, while Shaheen is making a comeback after being out for a month due to a knee injury.

Shami showed his best during India’s six-run victory in the warm-up match against Australia on Monday.

Australia needed 11 runs in the last over and Rohit Sharma gave the ball to Shami. The seasoned seamer did not disappoint; He took three wickets, affected one run out, and conceded only four runs.

India will take on New Zealand in their next warm-up match before playing Pakistan at the Melbourne Cricket Ground (MCG) on 23 October.