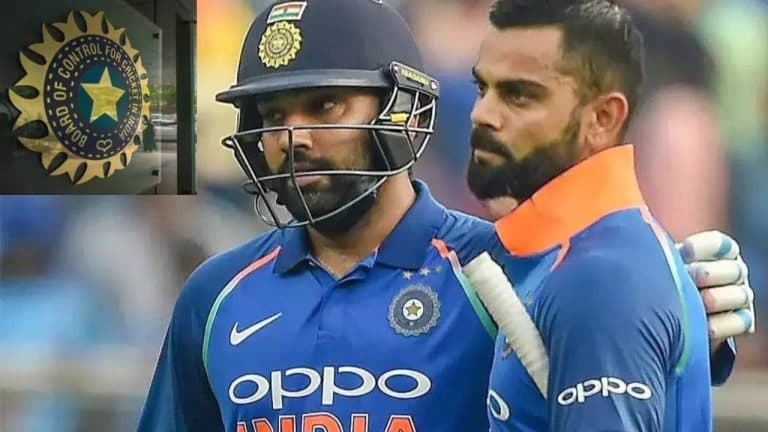 India vs New Zealand Series: BCCI – Rohit and Kohli out of T20 team

India Squad vs New Zealand Series: The national selectors have dropped Rohit Sharma and Virat Kohli from the T20 squad for the upcoming home series (IND vs NZ Series) against New Zealand.

India vs New Zealand Series: Will he be considered for T20s in the future?

The BCCI official said, “The exclusion of Rohit Sharma and Virat Kohli from the Indian T20 team is permanent. Anything can happen in the future but for now, we need to move forward. Go ahead and plan the team for the 2024 T20 World Cup. Unfortunately, they don’t fit into the new scheme of things,” InsideSport.

Read more: Jadeja Made Such a tweet on Social Media, fans Enjoyed a lot

Rohit Sharma had said, he hasn’t given up on the T20 format yet

The BCCI official said, “How can we decide his future? National selectors can only select teams for the good of Indian cricket. Rohit, Virat, and others are completely free to decide and speak about their future.”

Now BCCI is clear about Rohit, Kohli, and many other seniors. Along with these two, BCCI has included Mohammed Shami, Bhuvneshwar Kumar, R.K. Ashwin and Dinesh have gone ahead of Karthik as well. The selectors did not even consider KL Rahul for either the T20 or ODI squads.

Family commitments cited as the reason for Akshar Patel’s absence

The BCCI, however, cited family commitments as the reason for his and Axar Patel’s absence from both the ODI and T20 International squads against New Zealand.

Read more: Big Disclosure About the Retirement of MS Dhoni from International Cricket

Hardik Pandya will continue to lead the T20I team

Hardik Pandya will continue to lead the T20I team. The new selection committee also picked Prithvi Shaw, who last played for India in July 2021, in the T20I squad. Kuldeep Yadav, who was a man of the match for his 3/51 in the 2nd ODI against Sri Lanka on Thursday, has also returned to the T20I squad. Harshal Patel has been dropped.

With KL Rahul taking a break, the selectors have picked KS Bharath as the second keeper along with Kishan. In Akshar’s absence, Shahbaz Ahmed of Bengal has been called for the ODIs.