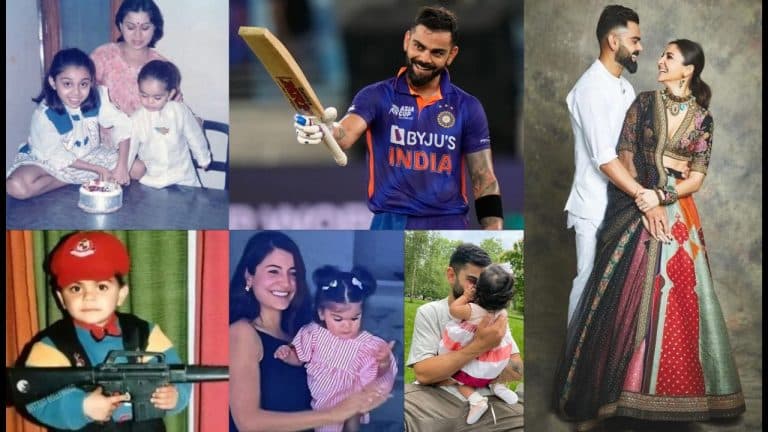 Indian team batsman Virat Kohli is celebrating his 34th birthday today, he is currently in Australia with the Indian team, where the World Cup is being played. Virat is in excellent form in this World Cup, the team will play the last match of the group stage against Zimbabwe on Sunday.

Their relationship garnered substantial media attention, with constant rumors and speculation in the media, as neither of them had spoken about it publicly.

In 2018, Kohli revealed that he completely stopped consuming meat to reduce his uric acid levels.

He clarified that he is a vegetarian and not a vegan:-

Due to this he developed problems with the cervical spine which affected his finger and in turn his batting. In 2021, he clarified that he is a vegetarian and not a vegan.

Kohli has admitted that he is superstitious. He used to wear black wristbands as a form of cricket superstition; Before that, he used to wear the same pair of gloves with which he was “scoring”.

Apart from a religious black thread, he has also been wearing a kara on his right hand since 2012.

Kohli has a lot of tattoos on his body, he has tattoos of Lord Shiva in meditation posture on Mount Kailash as he depicts Lord Shiva, Om, the names of his parents (Prem and Saroj), a tribal symbol, a monastery, of a samurai warrior do worship. The word ‘Scorpion’, and his ODI and Test cap numbers on his body.

Kohli was born on 5 November 1988 in New Delhi in a Punjabi Hindu family. His father, Prem Kohli, worked as a criminal lawyer and his mother, Saroj Kohli, is a homemaker. He has an elder brother, Vikas, and an elder sister Bhavna.

Kohli was raised in Uttam Nagar and started his schooling at Vishal Bharti Public School. In 1998, the West Delhi Cricket Academy was formed and a nine-year-old Kohli was part of its first intake.

Kohli trained at the academy under Rajkumar Sharma and at the same time played matches at the Sumeet Dogra Academy in Vasundhara Enclave.

In the ninth grade, he shifted to the Savior Convent in Paschim Vihar to help with his cricket practice. His family lived in Mira Bagh till 2015 when they moved to Gurgaon.

Kohli’s father died on 18 December 2006 due to a stroke after lying in bed for a month.

Other Honours And Awards