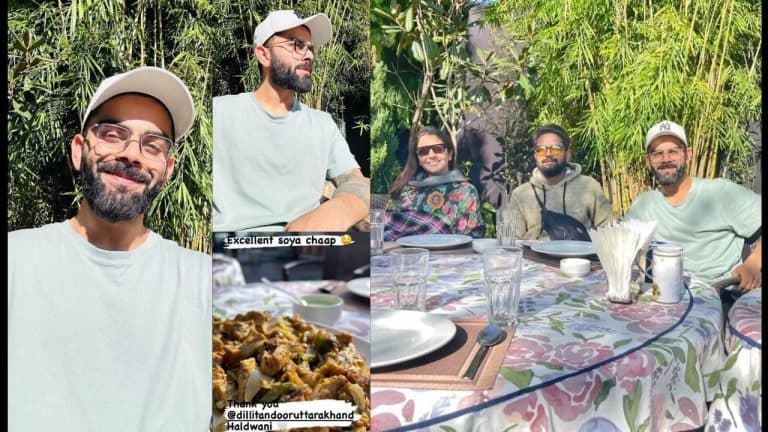 Kohli-Anushka Tasted Special Dish in Uttarakhand’s Restaurant. These days away from cricket, Virat Kohli is spending time with his family.

Have gone on holiday to Uttarakhand:-

Kohli is on a holiday in Uttarakhand with his wife Anushka Sharma and daughter Vamika.

On the other hand, Kohli tasted a special dish i.e. Soya Chaap with Anushka Sharma at a restaurant in Uttarakhand on Sunday.

In which he has put the photo of Soya Chaap. Also, he has written on that photo “Excellent Soya Chaap”.

Earlier, Kohli along with his fans also visited the Kakdi Ghat Ashram in Nainital on Friday. Whose photos have been shared by his fans on social media.

Virat Kohli along with his wife Anushka Sharma and daughter Vamika went to Ghorakhal by helicopter on Wednesday. No one could know where he stayed after this.

Virat went to Kainchi Dham with his family on Thursday morning. Here he visited Baba Nib Karori and meditated after reciting Hanuman Chalisa. No one knew where he went after this.

The bat was running fiercely in the World Cup:-

Let us tell you that in the T20 World Cup 2023, a great performance was seen by Virat Kohli. During this, Kohli’s bat went fiercely in the matches.

He also scored 3 fifties in the tournament. With this, he remained at number one in terms of scoring the most runs in the World Cup.