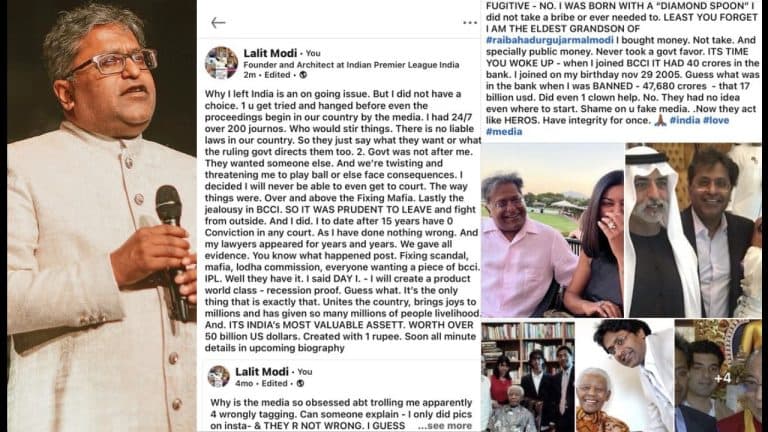 Meanwhile, IPL Founder Lalit Modi revealed through a post why he was forced to leave India and go abroad.

As you know, Lalit Modi was accused of financial corruption of Rs 470 crore including income tax evasion, after which he left the country fearing his arrest and never returned.

Everyone knows the reason behind why IPL had to leave India. It has been in the news for the last 12 years, and you must have heard about it at some point or the other.

Explained the reason behind his move:-

But this time Lalit Modi himself reacted to it, which had never come like this before. After 12 years, Lalit Modi gave the reason behind his move.

Lalit Modi made his point through a post on social media. Lalit said that he had no way but to leave the country.

Modi wrote – Before the legal process of the country started, the media was tired of hearing. Used to be surrounded by hundreds of journalists, there is no law in our country against this.

As a result, he could do whatever he wanted. He made many other allegations, which he shared on his Twitter.

He alleged that he was not the target but someone else. They were asking to misrepresent the information. I decided to move out of the country.

Lalit Modi said in his allegations that there is an atmosphere of jealousy inside the BCCI. At that time it was wise to drop everything and fight from outside.

Read more:– IPL 2023: Punjab Kings Can Retain These Players For The 16th Season Of IPL

That’s why I did this. I haven’t done anything wrong. My lawyers have appeared in the hearings for many years. We presented all the evidence in court.