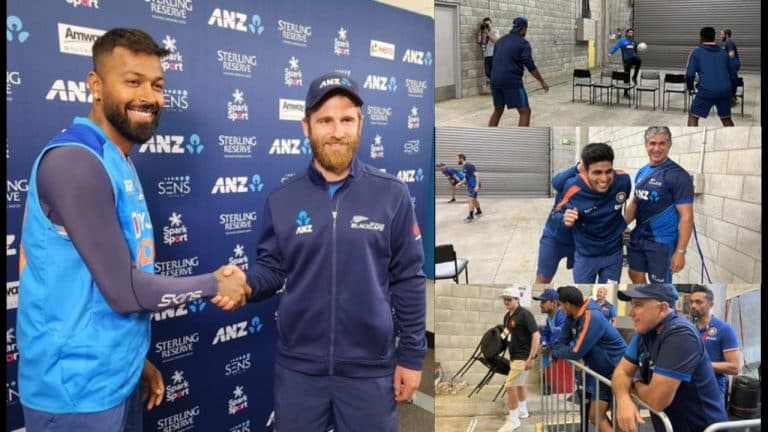 IND vs NZ T20 Series 2022: New Zealand and Indian players played indoor football and volleyball in the rain. The series of three T20 matches between the Indian team and New Zealand (IND vs NZ LIve) is to start today Friday.

This Match had to be Canceled:-

But before the match, it rained heavily in Wellington and the match had to be cancelled. Indian captain Hardik Pandya and Kiwi captain Kane Williamson are waiting for the rain to stop.

Also read:- Washington Caught His Ear Amid The Rain, Said – I will not Play This Game Even by Mistake

At the same time, the Kiwi Cricket Board (NZ Cricket Board) has posted a video of the players on its Twitter. Indian spinners Yuzvemdra Chahal and Deepak Hooda are also seen in this video. Both the players are enjoying standing on the sidelines.

Let us tell you that the official Blackcaps of New Zealand has posted a video on its Twitter handle account. In which players are playing football like volleyball and waiting for the rain to stop.

Blackcap has also given the caption, he has written that playing football and volleyball we are waiting for the rain to stop. In this video, Yuzvendra Chahal and Deepak Hooda are standing on the sidelines watching the game of Kiwi players.

Significantly, the first T20 match of the three T20 series between India and New Zealand is to be played in Wellington today i.e. on Friday. But it is raining heavily in Wellington at the moment.

The first T20 between Team India and New Zealand will now start delayed. Players of both teams are waiting for the rain to stop. It is clear in the official announcement that the toss will be delayed due to rain.

Team India has to play a series of the first three T20 matches against the host team New Zealand, followed by a series of three ODIs. Where Hardik Pandya will be seen captaining the T20 team.

And in ODIs, the command of the team has been handed over to Shikhar Dhawan. Although it is raining continuously in Wellington. Cricket fans fear that the rain may spoil the fun of the game.

Read more:-  IPL 2023: Late Night MS Dhoni Took Rituraj And Jadhav For A Drive in His New SUV in Ranchi