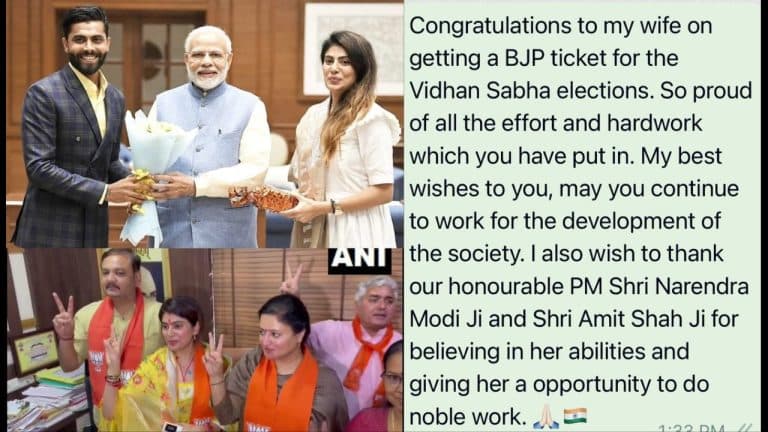 Ravindra Jadeja’s Wife Rivaba Jadeja will Contest Elections in Gujarat. She will contest on the BJP seat from Jamnagar North Legislative Assembly. This has been confirmed in the list of candidates released by the party.

Also read:- IND vs ENG Semi-Final: Virat Kohli is Close To Breaking His Own World Record

Jadeja and Rivaba’s love story is quite interesting. Ravindra met Rivaba in 2015 by his sister Naina. However, Jadeja was not ready at first but did not give in to her sister’s insistence, and Naina introduced Jadeja to Rivaba.

What was then when Jadeja saw Rivaba, he gave her heart and both of them got married a year later i.e. in 2016.

Jadeja’s wife Rivaba Jadeja was now becoming active in politics. He is involved in BJP (Rivaba Jadeja BJP) and is now ready to contest elections.

She will contest from Jamnagar. Rivaba was born in Rajkot, Gujarat. From here he also studied.

The couple has a daughter named Nidhayana:-

Ravindra Jadeja’s wife was born in 1990, her father is a businessman. Of course she will contest from BJP but she is the niece of Hari Singh Solanki of Congress.

She is also knowing as Rewa Solanki, she graduated in Mechanical Engineering from Rajkot. He had joined BJP in 2019.