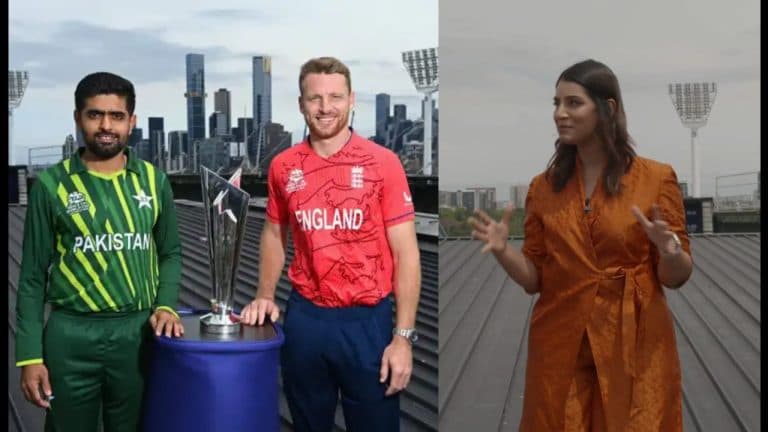 PAK vs ENG Final 2022: Sanjana Ganesan Interviewed The PAK-ENG Captains At The Top Of The Stadium. The final match of the T20 World Cup 2022 (T20 World Cup 2022) will be played between Pakistan and England (PAK vs ENG) on Sunday, November 13.

In this match, both teams will clash at Melbourne Cricket Ground in Australia from 1:30 pm.

Before this title match, there has been a special photo shoot of the captains of both the teams that reached the finals i.e. Babar Azam and Jos Buttler. Let’s know where this photo shoot happened.

The photoshoot was done on the roof of Melbourne Cricket Ground:-

Significantly, just a day before the final match of the World Cup. Babar Azam and Jos Buttler were photographing on the roof of the Melbourne Cricket Ground.

Whose video was sharing ICC on its social media handle? In this video, Sanjana is seeing answering questions from both captains.

Pakistan had a rough opening in the T20 World Cup 2022 and the team had to start their campaign with defeats against India and Zimbabwe.

But Pakistan entered the semi-finals by registering consecutive wins in the last 3 matches and defeated New Zealand to enter the final.