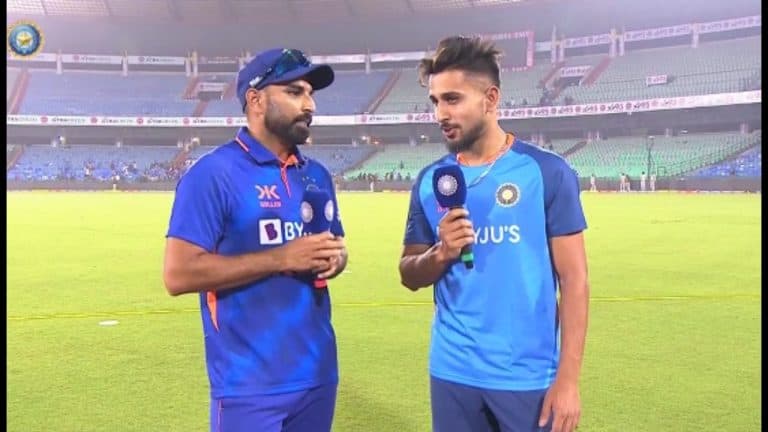 IND vs NZ 2nd ODI 2023: Shami was seen giving bowling tips to Umran by trying to control the line and length. India has sealed the three-match ODI series (IND vs NZ ODI Series) against New Zealand by 2-0.

Shami was adjudged ‘Player of the Match:-

In the second match played in Raipur on Saturday, the Indian team led by Rohit Sharma has taken an unbeatable lead by defeating the Kiwi team by 8 wickets.

In the second ODI, fast bowler Mohammad Shami was selected as the ‘Player of the Match’. Also, after the match, Team India’s young fast bowler Umran Malik interviewed Shami in which Shami was seen giving bowling tips to Umran.

If Team India manages to defeat the visiting team even in the deciding match, then it will become the number one team in the world in ODIs. After the second win, the rating points of the Indian team have gone up to 113 while New Zealand has 114 rating points.

IND vs NZ: While interviewing Mohammed Shami after the second match, Umran Malik asked him, what is the secret of being very happy when you play?

In response, Shami says, “When we play for the country, according to me, you should not let the pressure on you.

Just one thing should be kept in mind that you believe in your skill and the happier you are, the better your chances of performing.

So I think when we are doing well then we need more focus. Believe in yourself, believe in your skill, keep watching a little bit of what is happening in the wicket.

Whereas Shami said for Umran in this interview, “Bahut dum hai, future achcha hai. Wish you all the best, may you do well in the times to come.”

Shami Gave advice to the Young fast bowler and said:-

Also, Shami gave advice to the young fast bowler, saying. “It is not easy to play the pace that you have. So a little work is needed to have more control over the line and length. If you do this, you will conquer the world.”

In the second ODI, Mohammed Shami wreaked havoc on the visiting team. During this, he took 3 wickets for just 18 runs in 6 overs.

In the very first over, he sent Kiwi team opener Allen to the pavilion. Then he got his second wicket by hunting Darryl Mitchell. And he took the last wicket of dangerous batsman Michael Bracewell. Which was a very important wicket for Team India.