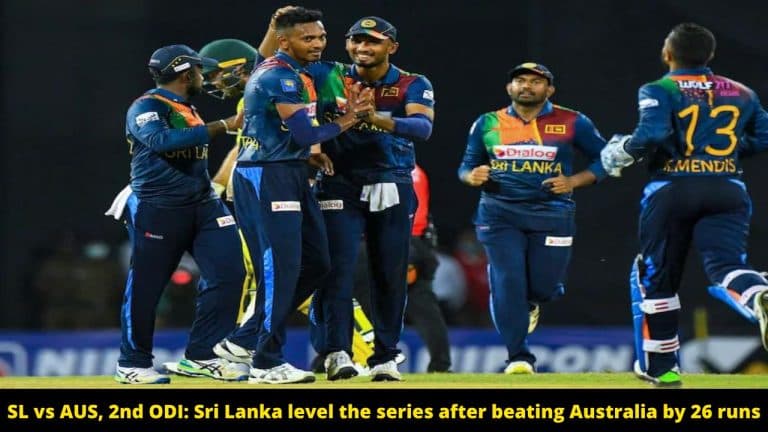 So far both the teams have won one match each and now the outcome of the remaining three matches of this series will be decided. Batting first, Sri Lankan team scored 220 runs for nine wickets in 47.4 overs.

After this the water started falling and the umpires had to end the first innings on this score.

In the second innings, Australia had a target of 216 runs in 43 overs. However, the Kangaroo team managed only 189 runs in 37.1 overs for the loss of all 10 wickets and lost the match by 26 runs under the Duckworth-Lewis rule.

SL vs AUS: Electing to bat after losing the toss, the start of the Sri Lankan team was not very good. Pathum Nishanka returned to the pavilion after scoring 26 runs. At the same time, Gunatilka was dismissed on the score of 35 and the team’s second wicket fell.

Kushal Mendis and Dhananjay de Silva took the innings by adding 61 runs for the third wicket. All Sri Lankan batsmen got a good start in this match, but none could play a big innings.

In the end, Sri Lankan team scored 220 runs in 47.4 overs for the loss of nine wickets. After this the match stopped due to rain and the umpires ended the first innings there.

Australia’s batting flop, could not make a half-century partnership :-

SL vs AUS: The performance of the batsmen of both the teams was the same in this match. In both the innings, the batsmen lost their wickets after a good start. Under the Duckworth-Lewis rule, Australia had a target of 216 runs in 43 overs.

In response, the first wicket of the Kangaroo team fell on the score of 39. Captain Finch was dismissed after scoring 14 runs. Even after this, the Australian team kept on losing wickets at regular intervals.

The Australian batsman could not make a half-century partnership in the entire match. In the end, this team was reduced to 189 in 37.1 overs and lost the match by 26 runs.

Also Read:- IND vs SA T20: Harshal Patel has no break even without speed, made himself unmatched in this way

David Warner scored the highest 37 runs for Australia. Apart from him, Glenn Maxwell scored 30 runs and Steve Smith scored 28 runs. Australia’s first seven batsmen played at least 15 balls and all scored more than 10 runs, but could not score a half-century.