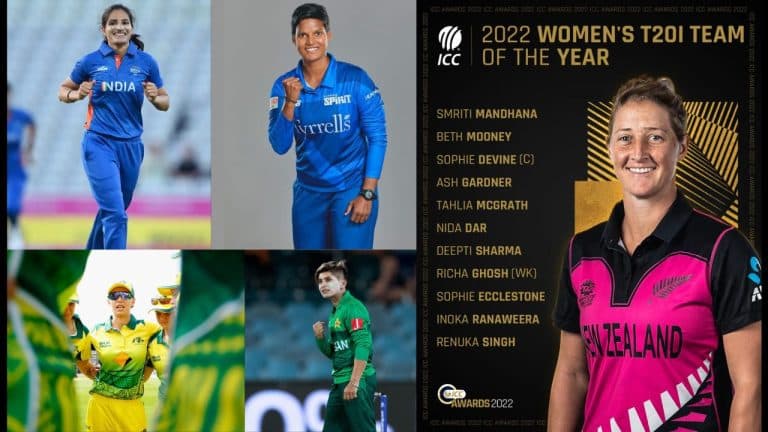 The 11 Players Revealed For ICC Women’s T20I Team Of The Year 2022. He has impressed one and all – be it with the bat, ball, or with their all-around exploits during 2022.

India’s batting superstar Smriti Mandhana had a stellar year with the bat, scoring 594 runs at an average of 33.00 and a strike rate of 133.48.

She scored five half-centuries in 21 innings during the year, including one against Sri Lanka in the final of the Women’s Asia Cup in October.

Top-scorer for the Australian team in the final of the Commonwealth Games against India in Birmingham with 61 runs from 41 balls, Mooney continued his form in the India series, scoring two half-centuries on debut in bilateral matches in subcontinental conditions.

With 389 runs and 13 wickets during the year, Sophie Devine once again stood above the rest. The New Zealand batsman scored half-centuries in back-to-back matches against Australia and England, two of the strongest teams in the Commonwealth Games.

Gardner entered the team this year scoring 216 runs at an impressive strike rate of 152.11. An average of 72 in doing so makes it one of the all-time best performances in a year by a batsman in the women’s game.

An average of over 60 with the bat while taking 13 wickets with the ball on the year in T20Is meant Tahlia McGrath was a no-brainer in the team of the year.

Dar went wicketless in only three of her 14 T20 matches, playing a crucial role every time she came to bowl.

The off-spinner took 29 wickets in the year, which is the joint third most by any bowler in Women’s T20Is.

Averaging 18.55 with the ball, Deepti bowled at an economy rate of just over six, while also handling the batting duties well.

With a strike rate of over 150 on the year, youngster Richa Ghosh was a standout player for India across formats. In 18 matches, the wicketkeeper-batsman scored 259 runs, hitting 13 sixes with the bat and displaying incredible flair from the lower order.

With 19 wickets in 17 T20Is, the No. 1 ranked T20I spinner in the women’s game has had another stellar year in the format. Ecclestone won the player of the match award twice in the year – once in the derby game against South Africa.

Sri Lanka’s left-arm orthodox spinner Inoka Ranaweera had a great year with the ball, taking 27 wickets in 19 T20Is, while averaging 13.85 with the ball and giving away runs at an economy rate of 5.75.

One of the nominees for the prestigious ICC Women’s Emerging Cricketer of the Year award, Renuka was much talked about earlier in the year.