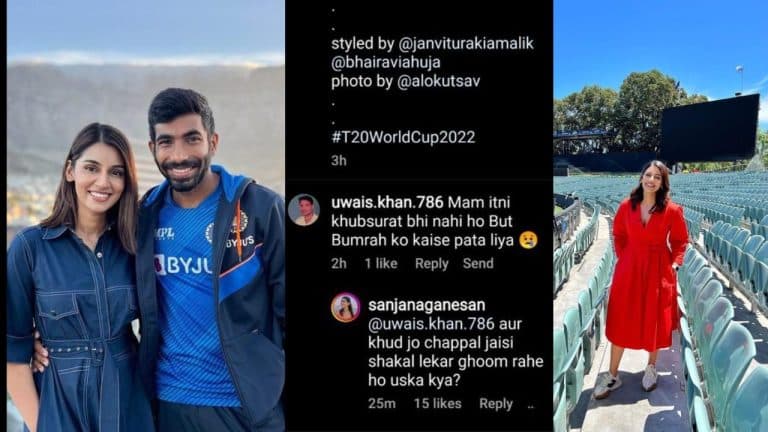 Trollers keep trolling him for one reason or the other:-

At the same time, Jasprit Bumrah may not be the best bowler of the Indian team in this tournament, but his wife Sanjana Ganesan is associated with it from the beginning.

Sanjana is a sports anchor, and she is currently in Australia. Sanjana is very active on social media, so trollers keep trolling her for one reason or the other. At the same time, something similar happened recently but Sanjana has responded to the trollers in a cracker avatar.

Ganesan recently shared a picture from his Instagram account. In he was commented by a troller that Sanjana has given a befitting reply to that troller.

A user wrote for Sanjana

A user wrote for Sanjana, who is seen on the Adelaide ground in the photo, “Ma’am not so beautiful but how did you catch Bumrah?”

In response, Sanjana wrote to that troller, what about the slippers who are walking around in the form of slippers themselves? This comment of Sanjana has become viral on the entire social media. Also, everyone is praising him.

However, this is not the first time that Sanjana has given a befitting reply to a troller. Even before this, she has silenced the trollers by giving such answers many times.

Apart from IPL, has also hosted many other series:-

Sanjana, a resident of Pune, is a sports presenter. Apart from the IPL, she has also hosted many other series from the ICC World Cup.

Jasprit and Sanjana Ganesan tied the knot in March 2021. At the same time, the two met for the first time in 2019 during the ICC ODI World Cup.

Bumrah is injured due to which he has to be out of this tournament. At present, Team India has performed well in his absence and now it has to fight against England in the semi-finals.

Sanjana has done many modeling shows before this. She has also participated in many reality shows. She is also a contestant in Miss India in 2014.