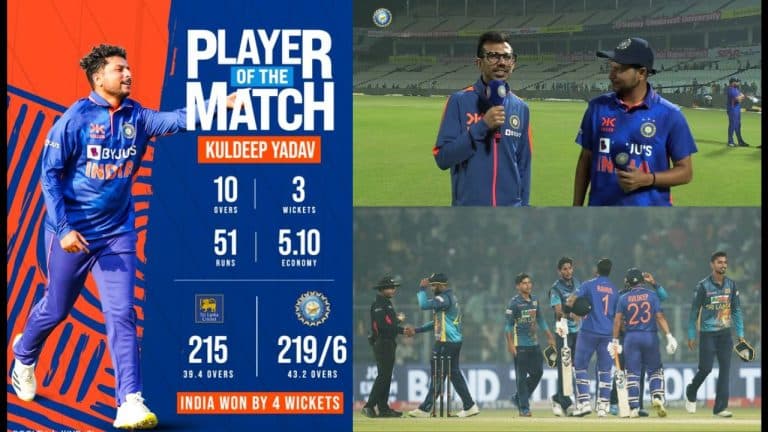 Hero of the match Yadav was interviewed by Yuzvendra Chahal:-

At the same time, in this match, India has won the series against Sri Lanka by 4 wickets.

At the same time, Yuzvendra Chahal has interviewed Kuldeep Yadav, who was the hero of this match. Let us know what was the conversation between the two players during this.

When Chahar interviewed Yadav, he said, “Chahal TV is back in Kolkata and Yadav is present with us, first of all congratulations to you as you have completed 200 wickets in international cricket.”

So further Chahal said, “Kuldeep also hit a cut shot during his batting” so Kuldeep wanted to remove the ball from above, so I played this shot.

Kuldeep is known for his excellent bowling in every format of cricket, but this bowler is not given many opportunities.

At the same time, Kuldeep Yadav was included in the second ODI against Sri Lanka. In this match, Kuldeep bowled brilliantly and made 3 players his victim against Sri Lanka. With this, now 200 wickets have been completed in Kuldeep’s international cricket.

In the second ODI played against Sri Lanka, winning the toss and electing to bat first, Sri Lanka had a very poor start and the team was all out for 215 runs.

In response, the start of the Indian team, which came to chase this target, was not very special, but in the end, India achieved this target and won by four wickets.

At the same time, Kuldeep Yadav and Mo. got the most wickets for India in this match. Siraj took 3-3 wickets.

Hit five fours and a six in the first four overs:-

Chasing the target, India hit five fours and a six in the first four overs with the help of openers Shubman Gill and Rohit Sharma.

KL Rahul scored an unbeaten half-century in his 50th ODI as India registered a four-wicket win over Sri Lanka in the second ODI at the Eden Gardens here on Thursday.

At the same time, India has won the three-match ODI series with an unassailable 2-0 lead in the series. The brilliant batting of KL Rahul and Hardik Pandya played an important role in helping India win the match.

On the other hand, in this match for Sri Lanka, Chamika Karunaratne and Lahiru Kumara tried to put pressure on the Indian team by taking two wickets each.