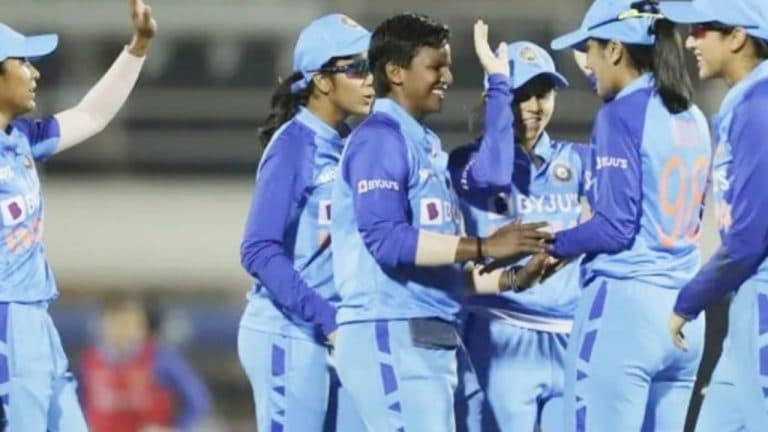 India accepted the invitation to bat first and scored 147 runs losing 6 wickets in 20 overs. In response, South Africa could score 120/9. Amanjot Kaur, who scored an unbeaten 41 in the debut match, was adjudged Player of the Series. Indian women’s team will play their next match against West Indies women on Monday.

Chasing the target of 148 runs, South Africa got off to a bad start. Deepti Sharma caught opener Laura Wolvaardt (6) on her own ball in the second over of the innings. In the fifth over, Rajeshwari Gaikwad gave another blow to the Proteas by getting Anneke Bosch (2) out caught by Yadav. From here Marijane Kapp (22) and captain Sun Luce (29) added 27 runs for the third wicket. Devika Vaidya gave India a crucial breakthrough by getting Cap caught out by Rana. Captain Luce was unlucky and returned to the dugout after being run out.

Deepti Sharma took the Most three Wickets from India

Devika Vaidya bowled Delmi Tucker on the very first ball to put South Africa on the back foot. South Africa had lost five wickets for 64 runs. Then Chloe Trion (26) and Nadine de Klerk (16) added 39 runs for the sixth wicket. Yadav got Trian out LBW to get India back. Rana bowled Clerk. South African team could score 120/9 in 20 overs. Deepti Sharma took the maximum three wickets from India. Devika Vaidya got two while Rajeshwari Gaikwad, Sneh Rana and Radha Yadav got one wicket each.

The Indian team, invited by South Africa to bat first, did not get off to a good start. Captain Smriti Mandhana (7) returned to the dugout after being caught by Tryon at mid-off off Khaka. Harleen Deol (8) run out. Jemima Rodríguez could not even open the account and caught by wicketkeeper Jafta off Malaba’s bowling. Yastika Bhatia (35) played some good shots while standing at one end. He added 26 runs for the fourth wicket with Devika Vaidya (9) to take the team past 50 runs. Tucker clean bowled Bhatia.

Malaba made Devika Vaidya his second victim. India had lost five wickets for 69 runs. Then experienced Deepti Sharma (33) and debutant Amanjot Kaur (41 *) took the lead. Both put India in a strong position by sharing a 76-run partnership for the sixth wicket. Sharma was the last batsman to get out. He gave a catch to Khaka on the ball of Cap. Deepti scored 33 runs in 23 balls with the help of a four and a six. Amanjot Kaur scored an unbeaten 41 in 30 balls with the help of seven fours. For South Africa, Malaba got two wickets while Kapp, Khaka and Tucker got one wicket each.