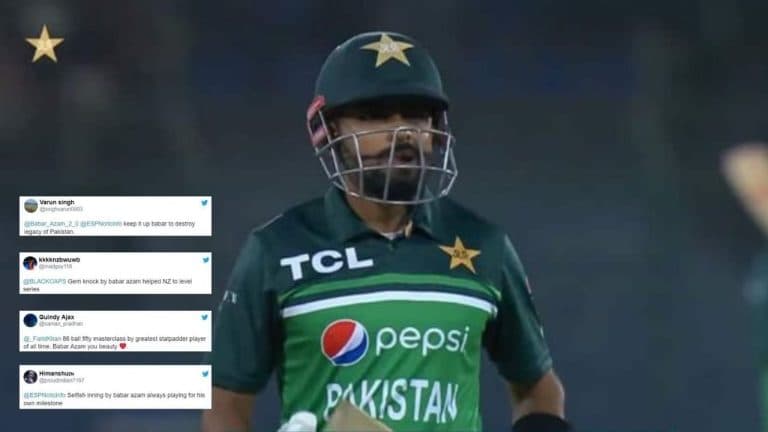 Fans Lashed Out at Babar Azam, said they Made ODIs a Test Match

The Pakistan team had to face a bad defeat in the second ODI against New Zealand in Karachi and after that a lot of questions are being raised on Pakistan captain Babar Azam. The fans are not happy with the kind of slow innings played by Babar Azam and they said that Babar has turned ODIs into Tests.

New Zealand beat Pakistan by 79 runs in the second ODI in Karachi to level the three-match series at 1-1. New Zealand scored 261 runs in the first play, in response to which Pakistan’s team got all out by scoring 182 runs.

Babar Azam scored the highest 79 runs for Pakistan but for this he played too many balls. A slow partnership between him and Mohammad Rizwan did not go down well with the Pakistani fans and they reacted angrily on Twitter.

Twitter reactions to Babar Azam’s slow inningsBabar Azam and Mohammad Rizwan do the same thing. When he comes in the field, the run rate is 8-9 and when he is out, then the required run rate becomes 11-13. The people who defend their ranking and average don’t care whether we win or lose. just compare him with kohli

I am a big fan of Babar Azam but all these things make him weaker than Virat Kohli. He cannot handle pressure and cannot be a match finisher. When you play well under pressure then only you will be able to become a big player.

Someone tell them that this is not a test, but an ODI match is going on