New Delhi: Former England captain Nasser Hussain has described Joe Root as the greatest batsman England has ever produced. Nasser said that Joe Root has taken cricket to a different level in the midst of difficult situations like Covid 19. He has played great cricket in the last 18 months. In a conversation with Daily Mail, Nasir Hussain said that I am talking about the cricketers whom I have seen playing and who have reached the top of the list in that list.

Also Read: Ranji Trophy: Madhya Pradesh enter the final after 23 years, Mumbai on the verge of becoming champions for the 42nd time

Joe Root is in tremendous form

Joe Root is in tremendous form these days. In the last two years, he has played excellent cricket and has broken many records. Looking at the form of Root, it seems that he will make many more records in his name. Root is the only player to have touched 10,000 Test runs in less than ten years after his debut.

Nasser Hussain said that Joe Root is in the best rhythm and always tries to score in a controlled manner. Now they are converting their fifties into hundreds. He will break the record of Alastair Cook and can make many more records in his name. He described the great cricketer Graham Gooch as the best batsman after Root. Cook was placed third by Nasir.

Joe Root has recently crossed the 10,000 runs mark in Test cricket. Joe Root has overtaken former India batsman Sunil Gavaskar and Pakistan batsman Younis Khan in terms of Test runs. In the Test series against New Zealand, Root scored a century in both the Test matches. Regarding his form, Root recently said that after leaving the captaincy, he is now batting without pressure and can play well in any situation. 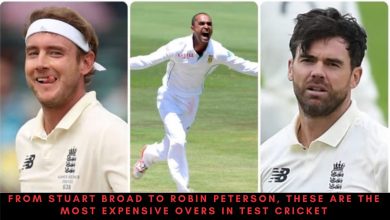 From Stuart Broad to Robin Peterson, these are the most expensive overs in Test cricket