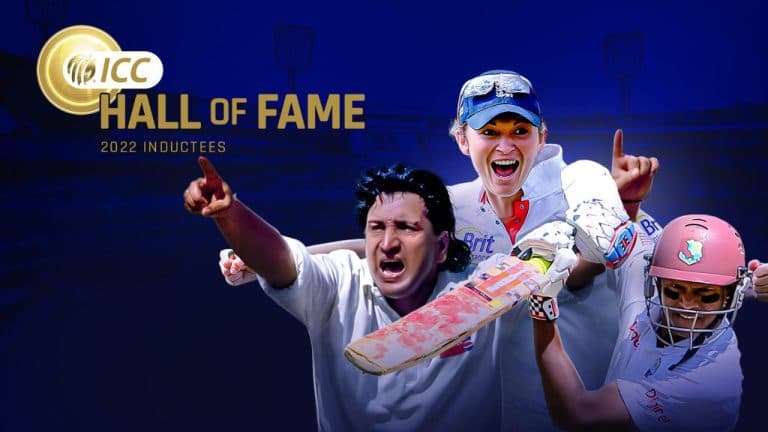 The ICC has inducted three more legendary players into the Cricket Hall of Fame. Shivnarayan Chanderpaul of West Indies, Abdul Qadir of Pakistan and Charlotte Edwards of England have been given this honor. The ICC said that Shivnarayan Chanderpaul is the 107th, Charlotte Edwards 108th and Abdul Qadir 109th to receive this honour. These three players will be honored in a special ceremony before the semi-file match in the T20 World Cup.

ICC Chief Executive Geoff Allardyce said, “The ICC Hall of Fame is honoring players who have taken cricket to new heights. Only the best players are honored this way. The enduring contributions of Shivnarine, Charlotte and Qadir Wonderful to remember. All three of them achieved tremendous success on the international stage and deserve a place in the ICC Hall of Fame.”

Shivnarine Chanderpaul is one of the most popular players in the history of West Indies cricket. With a unique batting technique, he started his career at the age of 19 and soon made a name for himself at the international level. He scored his first century after scoring 13 half-centuries in Test cricket. He then served West Indies cricket for 21 years and scored 30 Test centuries.

Also Read: Captain Rohit Sharma Got Injured During Practice Before The Semi-Finals

He had amazing control in his batting. Apart from this, he had the ability to play in any order. His defense was also very strong. For this reason he got success in Test cricket. He is the second West Indies player to score more than 10,000 runs in Tests. In 268 one-day matches too, his bat scored 8,778 runs.

After being inducted into the ICC Hall of Fame, Chanderpaul said, “It is a wonderful honor to follow in the footsteps of many legends and many other great cricketers of the past. I am grateful for this and thank the family, friends and most importantly West Indies cricket fans and those I want to enjoy this moment with the people who passionately supported me throughout my career.”

Charlotte’s career started at the age of 16

Qadir got respect after his death

Qadir passed away in 2019 at the age of 63, but his influence in the sports world continues to this day. During the 1970s and 80s, Qadir showed his leg spin bowling prowess. He was known for taking wickets of big batsmen. And took 236 wickets in a career spanning 13 years. He is third in the list of Pakistan’s highest wicket-taker spin bowlers.

He played an important role for Pakistan in the 1983 and 1987 World Cups. After retirement, he coached Mushtaq Ahmed, Danish Kaneria and Shahid Afridi as well as Shane Warne of Australia and Imran Tahir of South Africa.

Abdul’s son Usman Qadir said, “On behalf of the family, I would like to say a huge thank you to the ICC for inducting my father into the Hall of Fame. It is a huge honour. We regard it as a great achievement. Let’s see, and my father would be very proud if he was still with us today.”