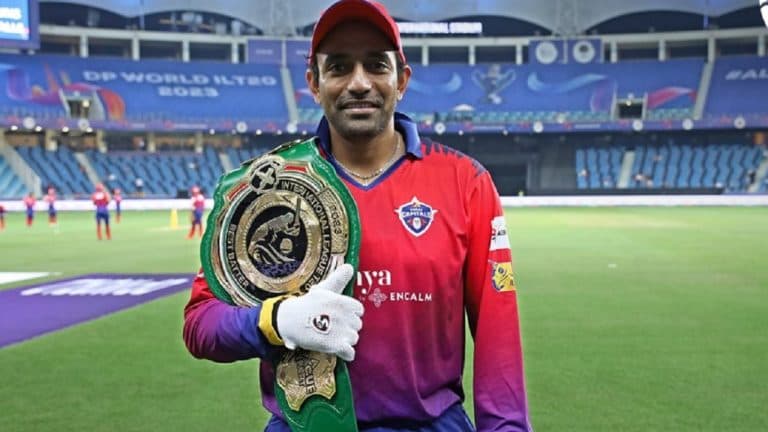 ILT20 2023: WWE in Cricket? Seeing Robin Uthappa with Green belt, the fans were Shocked, asked- what is going on

IL T20 League: WWE in Cricket? This was the question in everyone’s mind when they saw Robin Uthappa with his green belt on the cricket field. Just like any fighter fighting in WWE. Robin Uthappa was also seen proudly hanging the green belt on his shoulder like any other WWE wrestler. After seeing this picture of him, the fans were shocked and the same question kept coming in their mind that where did the belt like WWE come from in cricket. Why was Robin Uthappa seen hanging a green belt?

Actually, Robin Uthappa is currently playing International T20 League in UAE and its organizers have started giving belts in WWE style with the intention of honoring the highest run scorer in the tournament.

This belt definitely became a reason for fun for the fans. There was a flood of comments on Twitter. Everyone is trying to understand that when and why did WWE enter cricket? What is the purpose of giving this belt to the cricketer after the match. So let us answer all your questions here.

Let us tell you that the organizers have started the tradition of giving belts to the players with the intention of maintaining the interest of the fans in the ILT20 league and making it a little different from the rest of the cricket leagues of the world. It has been decided to give five types of belts in the first season of ILT20 events.

What is the Meaning of Different Belts in ILT20?

Green Belt, White Belt, Black Belt, Red and Blue Belt. The player who has the most runs at the end of the league will be given a green belt. At the same time, the player who has the most wickets in his account will get the white belt. However, during the tournament, the green and white belts will move between different players. Just like IPL. Like in IPL, the contenders for Orange (most runs) and Purple Cap (most wickets) keep changing with every match. The highest run scorer in the IPL gets Orange and the highest wicket taker gets Purple Cap.

Use of Belts to make ILT20 League Interesting

Exactly the same has been done in ILT20. The bus cap has been replaced by a belt. After every match, the player who takes the most wickets is given a white belt and the one who scores runs is given a green belt and he comes for the interview by hanging it on his shoulder.