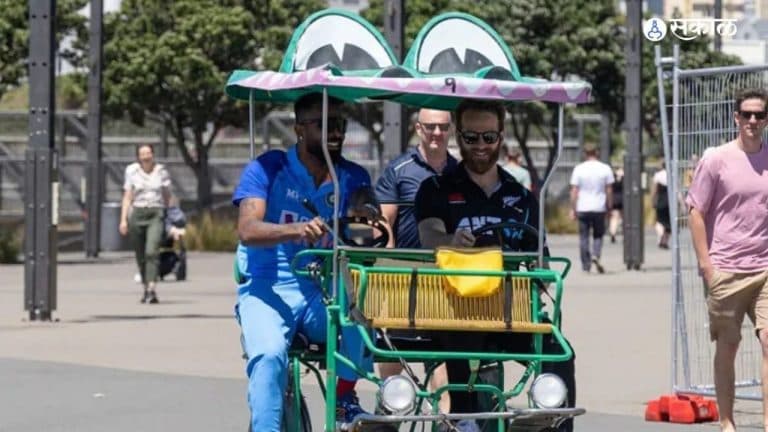 IND vs NZ: Hardik and Williamson were seen roaming in a rickshaw on the streets of New Zealand

The Indian team is going to start the Mission 2024 T20 World Cup. Team India will play a three-match T20 series against New Zealand from Friday. In this, Hardik Pandya will be seen captaining the team. It is believed that this has started the change in Team India and now some senior players including Rohit Sharma will be dropped from T20 format and only Hardik will be promoted as captain.

During this both of them reached for photoshoot in a special rickshaw. This rickshaw had two steering. Both Hardik and Williamson were seen driving the rickshaw. After this, both reached near the trophy kept on the beach and then got the photoshoot done. Hardik and Williamson were also seen laughing and joking during this. The rickshaw in which both were sitting is called Crocodile Bike in New Zealand. It is very popular there.

During the photoshoot when both were posing with the trophy

During the photoshoot, when both were posing with the trophy, a gust of wind came and shook the desk on which the trophy was kept. In such a situation, the balance of the trophy got disturbed. However, Williamson reacted just in time to catch the falling trophy and save it from the fall. This video is becoming quite viral on social media. Fans are talking a lot about Williamson’s reaction time. Hardik also saved the desk made of cardboard from falling.

Under the captaincy of Hardik, the young Indian team will try to beat the strong New Zealand team on paper and will want to prove themselves in this transition period. The three matches of the T20 series will be played on 18, 20 and 22 November. After this the three-match ODI series will begin. The first ODI will be played on 25 November, the second ODI on 27 November and the third ODI on 30 November. Shikhar Dhawan will take over the captaincy of Team India in the ODI series.

Both teams for T20 series