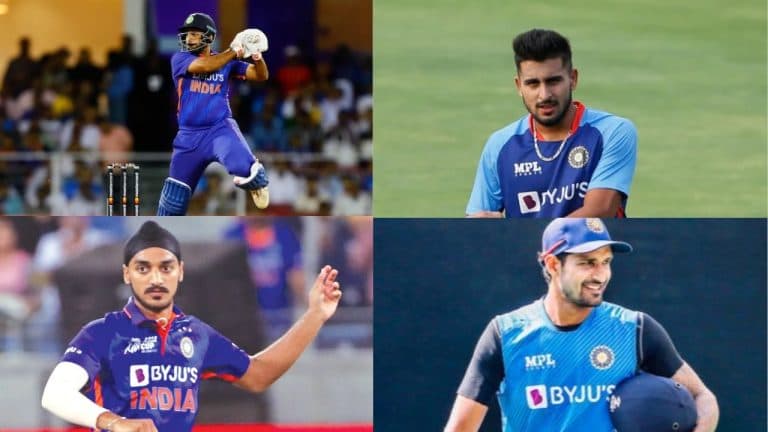 IND vs NZ: Sanju Samson or Hooda… Arshdeep or Umran, whom will Dhawan give a chance; How will the puzzle of Playing-XI be solved?

New Delhi. After the T20 World Cup, Team India is now eyeing the ODI World Cup to be held at home next year. Its preparation will start from the ODI series against New Zealand starting on Friday. In the absence of senior players like Rohit Sharma, Virat Kohli, temporary captain Shikhar Dhawan and coach VVS Laxman will have a chance to test new combinations in this series. However, even in the absence of senior players, India’s bench strength is so strong that it will not be easy for Dhawan-Laxman to solve the playing-XI puzzle. It will be very difficult for both of them to decide whom to keep out of the team and whom to bring in the playing-XI. This question stands in both bowling and batting department.

The biggest question or puzzle that the pair of Dhawan and Laxman will have to solve. It is Sanju Samson or Deepak Hooda, who should be given a chance in the playing-XI in the first ODI against New Zealand. By the way, Laxman has already indicated that he would like to try more and more all-rounders on this tour. Rishabh Pant being the vice-captain will be a part of the playing-XI and will also do wicketkeeping. What will happen to Samson in such a situation? This is the biggest question. Because despite performing well, Samson is not getting opportunities due to the presence of Pant.

The kind of thinking with which the Indian team is playing T20. In this format, preference is being given to those players who can bowl along with batting. If the same approach is adopted in the ODI series as well, then it is difficult for Samson to get a chance. However, ignoring them has its disadvantages too.

Also Read: Unmukt Chand was Selected in The Chattogram Challengers BPL Draft For The Upcoming Season

In the absence of Hardik Pandya, Samson can play the role of match finisher while batting at number five or six. This year he has batted well in ODIs. Just before the T20 World Cup, Samson batted well in the 3 ODI series against South Africa and took the team to the threshold of victory, playing an unbeaten 86 at number 6 in the Lucknow ODI. This year Samson has scored 248 runs in 8 innings at an average of 82. Two half-centuries are also added. But, along with batting, Deepak Hooda also gives the team the option of the sixth bowler. He also took 4 wickets for 10 runs in a T20 series match against New Zealand. However, as far as batting is concerned, he looks weaker than Samson. Hooda has scored 141 runs in 8 ODIs this year at an average of 28 and has taken only 3 wickets in 25 overs.

In such a situation, the Indian team management may give Samson a chance considering the inexperienced middle order.

One thing is common in both these players. That is, both have been battling with injuries for some time now. Washington Sundar as a player gives depth to the team in batting. Anyway, there are no finger spinners in the team. In such a situation, if Team India thinks of feeding two spinners, then their claim to be selected is strong. He can score fast runs at number 7. Whereas, Kuldeep can only bowl. He is a wrist spinner like Yuzvendra Chahal. In such a situation, the team landed with two wrist spinners. Its chances are looking less.

By the way, Kuldeep is the second spinner to take the most wickets this year after Chahal (21 wickets). He has taken 11 wickets in 7 matches this year. If the Indian team management keeps both Sundar and Kuldeep in the playing XI, then one batsman will have to be reduced. In such a situation, it will fall on Samson only.

Who will play between Arshdeep and Umran?

Both these bowlers are waiting for their ODI debut. Both have their own merits. If Umran has pace, then Arshdeep troubles the opposition batsmen with his swing and his different variations. He has proved his ability with the new ball in the T20 World Cup. Being a left-arm fast bowler, he brings variety to the bowling attack. Umran was also selected in the team for the T20 series against New Zealand. But, he did not get a chance in a single match.

Umran does not have much bowling experience in ODI format. He has played 3 List-A matches so far. In this, he has taken 2 wickets at an economy rate of 6.40. If this is kept in mind while selecting the team for the first ODI, then Arshdeep can get a chance to make his ODI debut. Because he has experience of international cricket. He takes wickets with the new ball and also bowls economically.