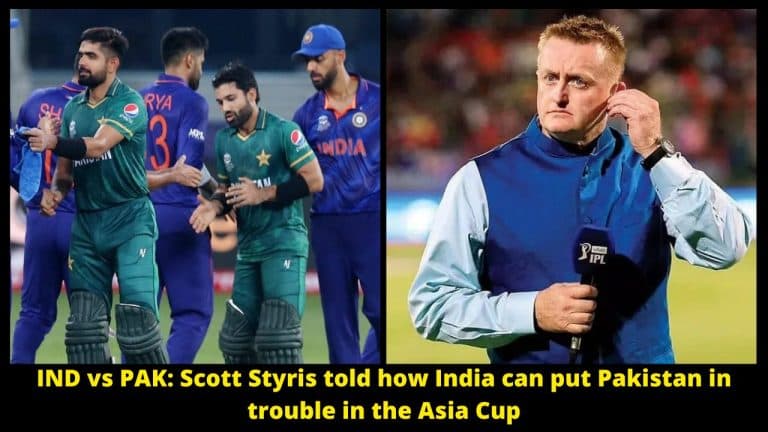 IND vs PAK: Scott Styris told how India can put Pakistan in trouble in the Asia Cup

IND vs PAK: Former New Zealand cricketer Scott Styris is also eagerly waiting for the India vs Pakistan match to be held on August 28 in the Asia Cup. Styris told who is such a strategy in this match, by adopting which Team India can put Pakistan in trouble.

The Asia Cup is to begin on August 27, but India and Pakistan will play their first match against each other on August 28.

IND vs PAK: Talking about both the teams, Styris said this:

Talking about both the teams, Styris said, “They should always be wary of this top order (of Pakistan), but here’s the thing, it’s the most unpredictable thing and what makes them the most predictable team.” .

I think Pakistan has adapted very well to the kind of cricket they want to play. And if I talk about India, I think he is working in this direction right now.

Styris further said, ‘But if you look at the Pakistani team, it is heavily dependent on Mohammad Rizwan and Babar Azam. After this, there are batsmen with a lot of power hitting in the team. So first these two players will give base to the team and then the rest of the players will score runs fast.

Also Read:- Shubman Gill is ready for his first stint in the County Championship with Glamorgan

It is necessary for India to give initial shocks to Pakistan :-

Suggesting a strategy for India, Scott Styris said, “The post-Pakistan batsmen are adept at targeting the spinners. It can work in favor of Pakistan.

So it will be necessary for India to give initial shocks to Pakistan. This will put pressure on the middle order batsmen and put the responsibility of giving base to the team, which they do not want to do.