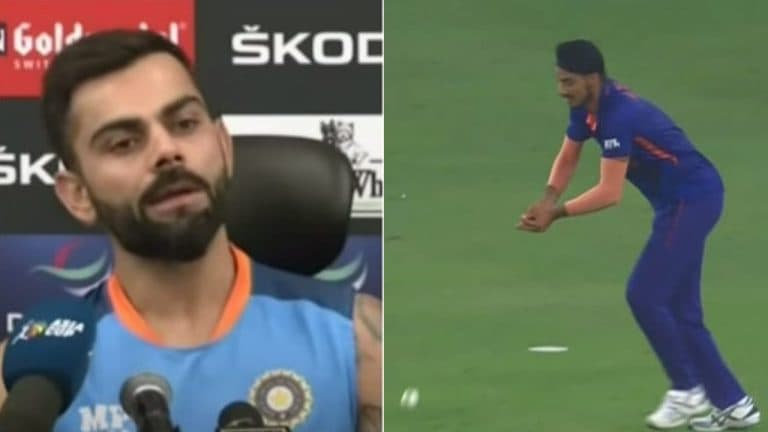 IND vs PAK: Virat Kohli said this in support of Arshdeep Singh

IND vs PAK, Virat Kohli: In the Asia Cup 2022, India had to face the first defeat of the tournament at the hands of Pakistan. Team India, which remained undefeated in the group stage, was beaten by 5 wickets by arch-rivals Pakistan in the first match of Super 4.

After the match, former Indian captain Virat Kohli came in support of young fast bowler Arshdeep Singh who dropped an important catch of Asif Ali in the 18th over. Talking about this mistake of the young player, Kohli said that such a mistake is made under pressure.

Also Read:- Coach Dravid Made Everyone Laugh A Lot With His Words in The Press Conference Before The Match

Virat Kohli said this in the press conference after the match :-

In the post-match press conference, Virat Kohli said, ‘It can happen to anyone under pressure. It is a big match, the situation was also tight. I remember when I played my first match against Pakistan in the Champions Trophy, I played a bad shot and got out. Anyone can make a mistake under pressure.

It is natural to feel bad. The team atmosphere is very good right now, thanks to the management and the captain. So one should admit one’s mistake, focus on it and be ready to come under that pressure situation once again.

Arshdeep Singh left an easy catch on the third ball of the 18th over :-

On the third ball of the 18th over, Arshdeep Singh left a simple catch of Asif Ali in the direction of short third man. Asif’s account not even opened at that time. After this, this Pakistani batsman played an innings of 16 runs in 8 balls with the help of 2 fours and 1 six, which proved to be decisive. If Arshdeep had caught Asif at that time, then perhaps the result of the match would have been in India’s favour.

Virat Kohli, who has been going through a bad phase for some time, seems to be returning to the rhythm in the Asia Cup. In all the three matches he has played so far, he has scored more than 30 runs. While in the last two matches he has also scored half-centuries.

After scoring 60 runs against Pakistan, Virat Kohli said about his batting, ‘I have played cricket for 14 years. It doesn’t happen by chance. I was able to score runs. My job is to work on my game, improve my game for the team, something that I have always wanted to do.

People give opinions but it doesn’t change my happiness as a person. I took some rest to put things in perspective. It has given me relaxation and the feeling that this is not the end of the world. I need to enjoy my game. This enabled me to regain the excitement. When I came back the atmosphere was welcoming and I am enjoying the way I am batting.