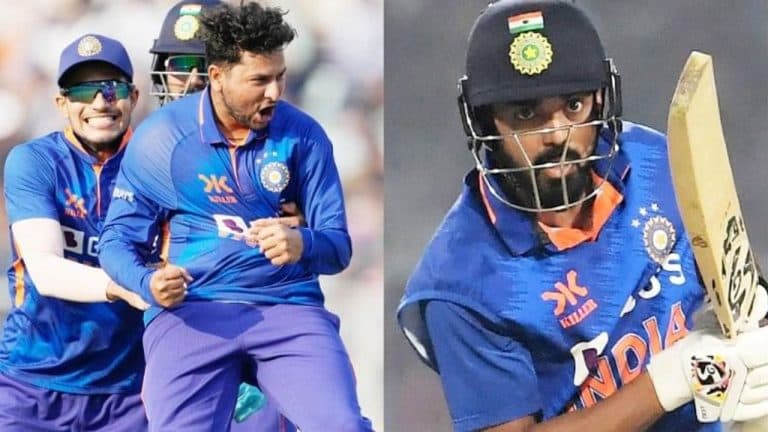 India beat Sri Lanka by four wickets in the second ODI at the Eden Gardens in Kolkata to take an unassailable 2-0 lead in the three-match series. Now the third match will be played on January 15 at the Greenfield International Stadium in Thiruvananthapuram. Batting first in the second ODI, Sri Lanka’s team was reduced to 215 runs in 39.4 overs. In response, India had lost four wickets for 86 runs at one stage.

Captain Rohit Sharma, Shubman Gill, Virat Kohli and Shreyas Iyer had returned to the pavilion. After this, KL Rahul and Hardik Pandya together pulled Team India out of trouble and laid the foundation for victory. There was a 75-run partnership for the fifth wicket between Hardik and Rahul. Hardik was dismissed after scoring 36 runs in 53 balls, but Rahul stitched partnerships with Akshar and then Kuldeep to win Team India.

At the same time, Kuldeep Yadav, who made a place in the team after the injury of Yuzvendra Chahal, got to see havoc in the bowling. At one stage Sri Lanka were 102 for the loss of one wicket before Kuldeep came to bowl and the team was heading towards a big score. After this Kuldeep came and he gave three big blows one after the other. Kuldeep first sent inform batsman Kusal Mendis (34) lbw to the pavilion. After this Charit Aslanka (15) was caught and bowled. Then the in-form Sri Lankan captain Dasun Shanaka (2) was clean bowled. In this way, Kuldeep destroyed the middle order of Sri Lanka.

With these three wickets, Kuldeep also scored a double century of wickets in international cricket. He now has 200 wickets in 107 international matches. He is the 10th spin bowler from India to reach this milestone. Kuldeep took three wickets for 51 runs in the match. Apart from him, Siraj also took three wickets. At the same time, Umran Malik got two wickets and Akshar Patel got one wicket. With this victory over Sri Lanka, Team India won their 10th consecutive bilateral ODI series against them. Overall this was Team India’s 15th bilateral ODI series win over Sri Lanka.

Sri Lanka’s Record of most Defeats in ODI-T20

Sri Lanka has played a total of 880 matches in its ODI history so far. Out of this, the team has won 399 matches, while 437 have faced defeat. Five matches were tied. This is the record for the most defeats by any team in ODIs. At the same time, the record of most defeats in T20 is also in the name of Sri Lanka. This team has played a total of 176 T20s and won 79 of them. The Sri Lankan team has lost in 92 matches. Three matches were tied and two matches ended in no result.

Sri Lanka on top even in Defeat against any one team

Apart from this, the record of most defeats by a team against any one team in ODIs and T20s is also in the name of Sri Lanka. Sri Lanka has lost 95 out of 164 ODIs against India. This is the highest among all teams. During this period, Sri Lanka won 57 matches, while one match was tied and 11 matches ended in no result. At the same time, India has defeated Sri Lanka in 19 matches in 29 T20s between the two. During this, Sri Lanka won nine matches in a row and one match remained inconclusive.