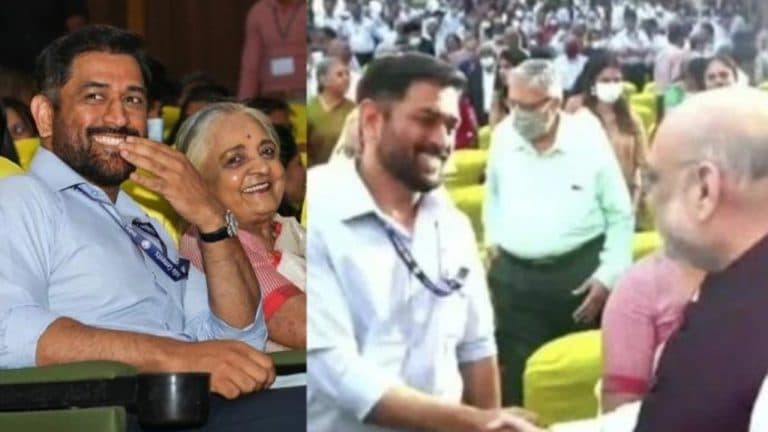 There is a tremendous fan following of sportspersons and leaders in the country. Many sportspersons have entered politics and have also achieved success. People also want to see their favorite sportsperson in politics. Meanwhile, former Team India captain Mahendra Singh Dhoni and Union Home Minister Amit Shah had a meeting. After this people started asking different types of questions.

These pictures of Amit Shah and Dhoni together went viral on social media. After seeing both of them together in the pictures, people started asking whether Dhoni is going to join BJP?

In a picture that went viral on social media on Saturday, Dhoni is seen shaking hands with Union Home Minister Amit Shah. This picture is from an event organized on the occasion of 75 years of India Cements. Tamil Nadu Governor RN Ravi also attended it.

It is known that N Srinivas is the owner of India Cements, who also has Chennai Super Kings team in IPL. Amit Shah, who arrived in Chennai for the program, was welcomed by many BJP leaders at the airport.

Seeing the pictures, people are commenting in different ways: –

Seeing the picture of Dhoni and Amit Shah together, people are making different comments. A user asked if Mahendra Singh is going to join BJP? However, this question was asked in a witty tone.

There has also been speculation about Ganguly :-

This is not the first time that there has been speculation about a cricketer joining the BJP. Earlier, during the West Bengal assembly elections, such speculations about Sourav Ganguly had been happening many times.

Ganguly was also made the BCCI President, after which speculations got further fueled. Some pictures of his meeting with Amit Shah also came to the fore. However, later Ganguly did not join any party.

Also Read:- T20 WC 2022: Butler selected Suryakumar as player of the tournament before the final