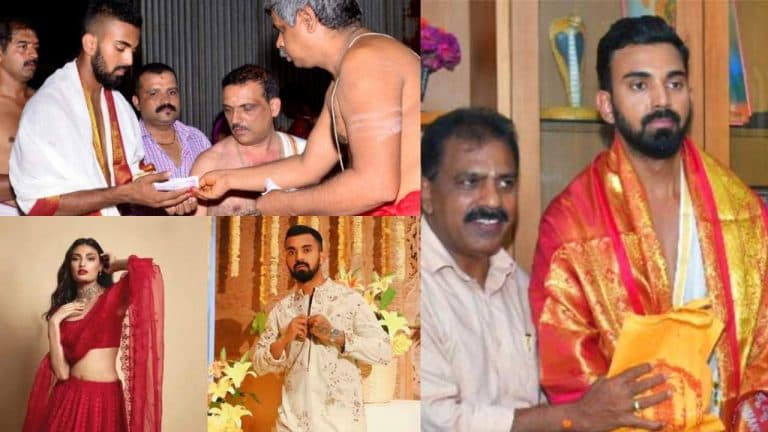 Team India’s vice-captain KL Rahul is preparing for his grand wedding with Bollywood actress Athiya Shetty. On the other hand, Rahul visited the famous Kukke Subrahmanya temple in Mangalore on Wednesday. At that time his friends were also with the vice-captain. However, Athiya was not with him. Let us tell you that Rahul and Athiya will get married in January 2023 (Rahul Athiya Wedding) at Sunil Shetty’s Khandala Mansion. For now, Rahul is enjoying his break and will next be seen in action during India’s tour of Bangladesh.

The temple administration paid special attention to the Mangalore-bred cricketer

During this, the temple administration paid special attention to Rahul’s visit and also blessed him for marriage. Management committee chairman Mohan Ram Suli and other temple authorities took special care of the Mangalore-bred cricketer. Team India’s vice-captain visited the temple in a good way and during this time he was wearing traditional clothes. At the same time, after visiting the temple, Rahul also enjoyed ice cream.

Both will be seen in traditional South-Indian attire

Though the wedding dress of Rahul and Athiya has not been revealed. Both designers will carry the attire. It is also said that both will see in traditional South-Indian attire. Let us tell you, Athiya’s favorite designer is Manish Malhotra. And she looks like the Bollywood actress is all set to do the same for her big day. As far as Rahul is concerned, it is not clear whether he has opted for designer wear or casual wear. The couple will get married at Sunil Shetty’s Khandala Haveli. The power couple has opted out of five-star hotels and opted for a cozy home wedding. As of now, the date is not finalized.