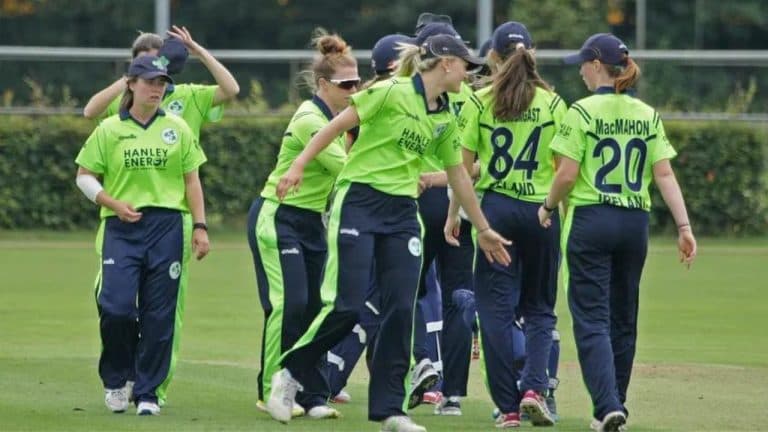 Gaby Lewis, Amy Hunter and Arlene Kelly helped Ireland to a historic series win against Pakistan on the country’s first ever visit. With the three-match T20I series level at 1-1, Ireland trounced the hosts by 34 runs in the decider in Lahore.

Lewis led the way with a 26-ball half-century, the second fastest half-century for Ireland in T20Is.

After Ireland opted to bat, Lewis and Hunter put on a 110-run partnership for the first wicket. It was only the third time that Ireland had shared a century partnership in Women’s T20Is. Lewis and Hunter used the crease well to find gaps in the field and ended the powerplay at 56 for no loss, and by the end of the tenth over, they were 87.

Lewis led the way with a 26-ball half-century, the second fastest half-century for Ireland in T20Is. Nashra Sandhu broke the opening stand by dismissing Hunter for 40. And Lewis was dismissed two overs later for 71 off 46 balls, but Orla Prendergast kept the momentum going by scoring 37 off just 23 at No. 3. This meant Ireland posted 167 for 4. His highest against Pakistan.

In reply, Pakistan kept losing wickets at regular intervals while Javeria Khan kept going from one end. A flurry of fours off Laura Delany and Richardson saw him reach his half-century off 36 balls, but Alan Maguire soon dented Pakistan’s hopes. At that point, Pakistan needed 86 runs from 53 balls with six wickets in hand. While Nida Dar took on the spinners during her 24-ball 26, it was too tall a mountain to climb.

Kelly, who barely let the batsmen get away, took three wickets to go with Delany’s three.

Also Read:-IND vs NZ T20s: Indian Players were Seen Having Fun On The Beach Of Wellington