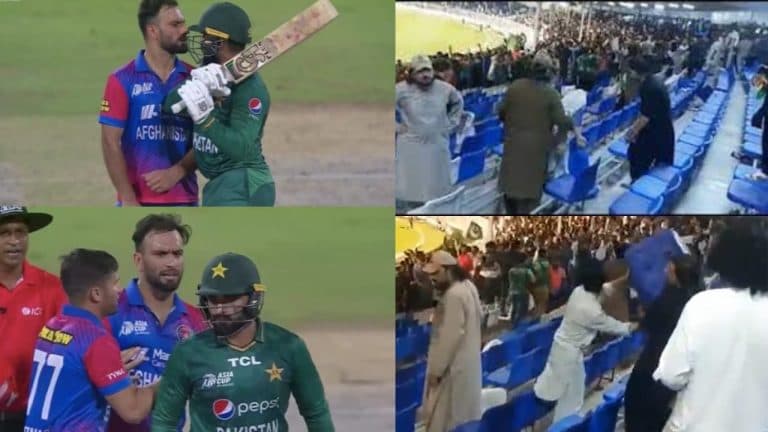 But after the thrilling match between Pakistan and Afghanistan on Wednesday night, the pictures and videos that have come out have put cricket to shame.

In fact, after losing the match, the fans of Afghanistan were seen beating Pakistani fans in the stadium itself, as well as they uprooted the chairs of the ground. After these videos went viral, former Pakistan fast bowler Shoaib Akhtar also expressed his anger.

Shoaib Akhtar posted a video of the incident on his Twitter account and wrote, ‘This is what Afghan fans are doing. This is what he has done many times in the past. It is a game and should be played and taken in the right spirit. Shafiq Stanikzai If you guys want to get ahead in the game then both your fans and your players need to learn a few things.

PAK vs AFG: There was a scuffle in the middle of the match between Asif Ali and Farid Ahmed :-

Shoaib Akhtar named the Afghan players here because of the scuffle between Asif Ali and Farid Ahmed during the match. In the last two overs, Pakistan needed 21 runs to win.

On the very second ball, Haris Rauf was dismissed and pushed Pakistan on the back foot. Asif was still at the crease. On the fourth ball of the over he hit a six between long on and mid-wicket to keep Pakistan’s chances of victory alive.

On its next ball, Farid Ahmed trapped Asif Ali on a slow bouncer. It was caught by Karim Janat standing at short third man. After the dismissal of Asif Ali, Fareed celebrated in front of Asif’s mouth in enthusiasm. After it the Pakistani player got enraged.

On the field itself, Asif Ali pushed Farid and later showed himself to sit to kill. In this escalating fight between the two players, umpire along with the rest of players had to come to rescue.

PAK vs AFG: Batting first, Afghanistan had set a target of 130 runs for Pakistan to win. He achieved this score with 1 wicket remaining and got the ticket for the final of Asia Cup 2022. Naseem Shah gave this victory to Pakistan by hitting two back to back sixes in the last over.