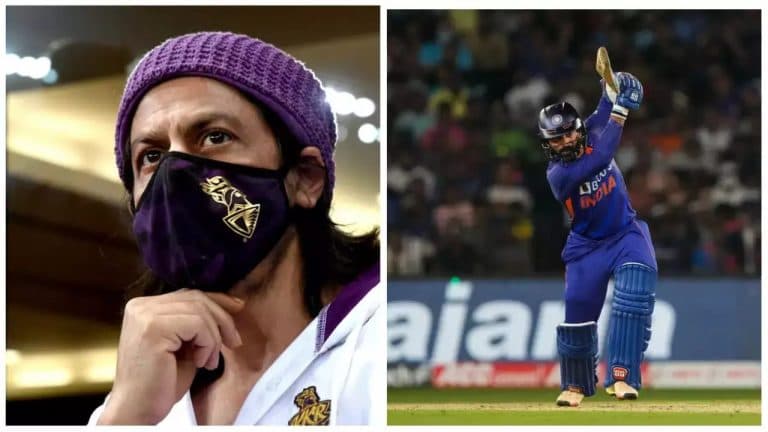 Pathan Release: Dinesh Karthik Congratulated Shahrukh Khan for the Release of the film, said you all Deserve Success

Pathan Release: Bollywood’s King Khan i.e. Shah Rukh Khan is going to rock the silver screen after a long time with the film Pathan. Dinesh Karthik Congratulated Shahrukh Khan for the Release of the film. Before the release of this film of Shahrukh, there has been a big bang on other platforms including social media (Pathan Released). Finally, the wait for the fans of King Khan is going to end today. The film is going to create riots in theaters in no time (Pathan Review).

On one hand in the film world where there is discussion about this film. At the same time, the veteran batsman of the Indian cricket team, Dinesh Karthik has tweeted and wished for the success of the film. Dinesh Karthik is very excited about the film. He tweeted that Bollywood’s Shah Rukh Khan deserves all the success as the actor returns to the screen after more than four years.

Dinesh Karthik was Overshadowed by his Strong Performance in this match

Let us tell you that Karthik Aryan has played for Shah Rukh Khan’s team Kolkata Knight Riders in the Indian Premier League (IPL) from 2018 to 2021. He was an important part of the team that reached the finals in 2021. Dinesh Karthik was overshadowed by his strong performance in this match.

Shah Rukh is returning to the silver screen after a long gap after Aanand L Roy’s Zero in 2018. This is the reason why fans are more excited about the movie Patheen. You will be able to enjoy this movie in theaters in no time. Let us tell you that the film Pathan is a spy thriller film, Deepika Padukone and John Abraham will be seen in the lead roles along with Shahrukh Khan. In the film, the audience will get to see the new avatar of Shah Rukh Khan.

The craze of the film can be gauged from the fact that Pathan has broken the record of advance booking of all films in the Hindi cinema world. Looking at a report of Scanik, a website giving information about the trade business of the cinema world, advance booking of about 8 lakh 5 thousand 915 tickets has been done for the first show of Pathan till 11.30 pm on Monday night. This includes about 768,959 tickets in the Hindi version. Apart from this, the tickets for the Telugu version have been booked the most. On the other hand, tomorrow i.e. January 26 being a national holiday, the number of advance bookings is more than 4 lakhs.