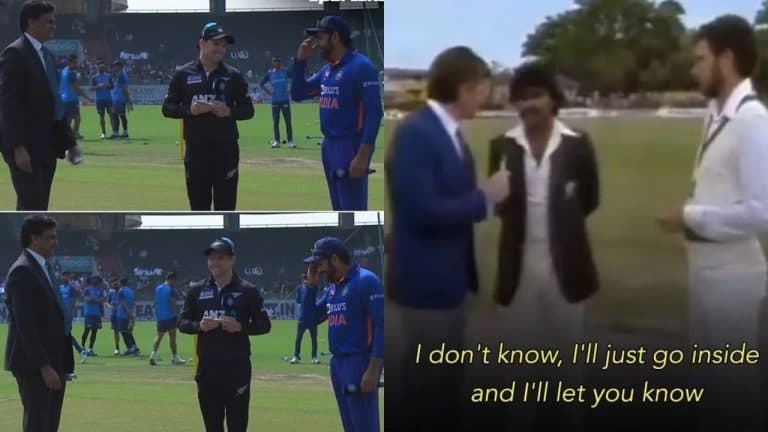 India and New Zealand (IND vs NZ) is going to play the second ODI series and the first international match on this ground today at the Shaheed Veer Narayan Singh International Stadium in Raipur. The Raipur ground has become the 50th stadium in India to host an international ODI match. A strange incident was witnessed during the first toss of this match. In which Team India captain Rohit Sharma forgot to take a decision after winning the toss. But he took his time and decided to bowl. After seeing this funny incident, match referee Javagal Srinath and New Zealand captain Tom Latham also could not stop laughing.

Rohit Sharma forgot to take the decision after winning the toss. But people on Twitter remembered former Pakistan captain Javed Miandad after this incident. During an international match, Pakistan captain Javed Miandad came for the toss and after winning the toss. He did not take the decision and said, ‘I don’t know. I will go to the dressing room and talk to the team and tell this decision.’ This old video and anecdote of Javed Miandad is continuously going viral on social media and cricket fans are comparing Rohit Sharma’s toss decision with this ridiculous incident.

After winning the toss, Rohit said that I forgot what we wanted to do, had a lot of discussion with the team about the toss decision. Just wanted to challenge myself in difficult conditions, but we will bowl first. It was a good test for us, knowing that the wicket would be better to bat on and that was the challenge before us. Fans made fun of Rohit Sharma for forgetting this way on Twitter and also trolled him.