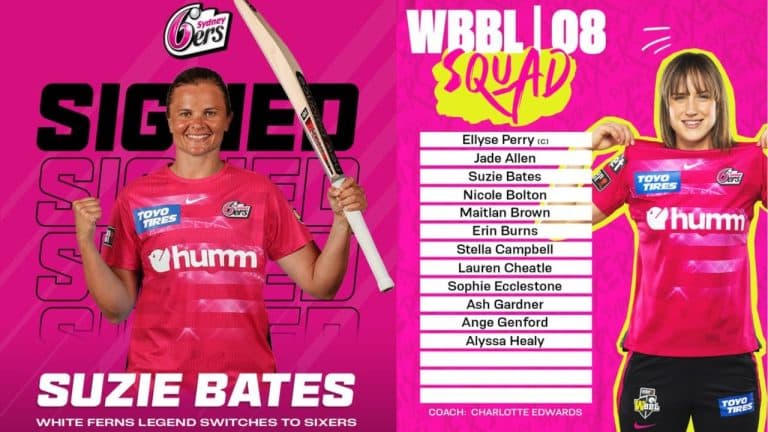 Sydney Sixers Squad: Suzy Bates of New Zealand signed with Sydney Sixers for WBBL08. who recently led the Oval Invincible to their second title at The Hundred.

Signed with Sydney Sixers for the eighth edition:-

Sydney Sixers have been signed for the eighth edition of the Women’s Big Bash League (WBBL), the club announced on Thursday (15 September).

Also read:– ENG vs PAK 2022: The England Cricket Team has Reached Karachi For The First Tour Of Pakistan in 17 Years

The 34-year-old has previously represented the Perth Scorchers and Adelaide Strikers in the tournament. He has scored 1738 runs and has taken 35 wickets in 71 WBBL matches.

“They have a star-studded line-up, and I can’t wait to be a part of that team. They have been one of the most successful clubs in the history of the WBBL… but I think they accept that.” Will be the first to do that in recent days they haven’t done as well as they would have liked.

Can’t wait to be part of the team:-

I can’t wait to be part of a team that wants to make it to the finals and win the championship,” Bates said.

Bates, who has represented New Zealand in 273 matches in two limited-overs formats, is the highest run-scorer in the world in T20Is.

He made a career-threatening return to international cricket this year to recover from a shoulder injury.

The right-handed batsman had a successful period with the bat where he won a bronze medal at the Birmingham Commonwealth Games before helping Invincible retain his title in The Hundred.

“I haven’t played in WBBL in the last two years due to injury and COVID, so I am excited to go back to Australia. I am clearly on new ground, but Sydney is always behind the Sixers.

It is going to be a big tournament in which the top players will play. There’s a new season here and a new color for me – I hope it suits!” Bates said.

Bates, who has worked with Charlotte Edwards for the Southern Vipers and Adelaide Strikers in the past, said that Edwards being the head coach of the Sixers is the biggest reason for signing with the team in the pink.

“I’ve worked with ‘Lotte’ in the past, and having them there as coach was a huge reason for signing … knowing they would lead well,” Bates said.

“I talked about my role at the top of the order and what I have done for every team I have played in: trying to contribute with the bat.

Bringing senior leadership on the field; I help the team as much as I can, and just being a good person around the group.”

Edwards, who recently led the Southern Braves to the final of The Hundred, said Bates’ inclusion would make any team stronger and the Sixers were lucky to have him.

“Suzie is a great team person. Any team with her is definitely strong and we at the Sixers are very lucky to have her.

She is an important signing for us as a group in what she brings on and off the field.

Suzie is coming back winning The Hundred

In the context of ‘onfield’, we have identified a starting batsman as a position that we need for WBBL. 08 – and Suzy is the world leader in that position,” Edwards said.

“Suzie also has a lot of experience playing in the WBBL, and it will be very valuable to our group. She is in the form of her life, coming off winning The Hundred where she has played a key role as a leader and opener.