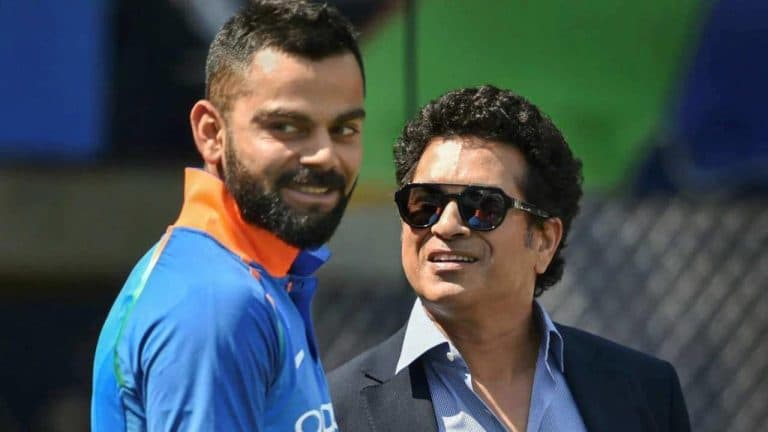 Virat Kohli: This T20 World Cup was also great for Indian run machine Virat Kohli, but it is sad that King Kohli once again missed out on lifting the T20 World Cup. England ended the Indian team’s World Cup campaign in the semi-finals by defeating Team India by a huge margin of 10 wickets.

But before saying goodbye to the tournament, Virat Kohli broke many records of Sachin Tendulkar, who is called the God of Cricket. One of these was also the world record for the most runs in the ICC World Cup for more than 50 runs.

Broke the record of touching the highest 50+ figure in the World Cup :-

In the semi-final match against England, Virat Kohli played a brilliant innings of 50 runs in 40 balls, scoring his fourth half-century of the tournament. With this innings, King Kohli has broken the record of Sachin Tendulkar, who is called the God of Cricket, in the matter of scoring 50 or more runs in the ICC World Cup.

This was Kohli’s 22nd score of 50 or more in the ICC World Cup. Sachin Tendulkar did this feat 21 times during his career.

Sachin had a record of scoring 2719 runs in ICC tournaments. In this list, Rohit Sharma is third with 2486 runs. Yuvraj Singh is at the fourth position with 1707 runs.

While giving his personal best, Virat Kohli is contributing fully for the team’s victory. But his dream of winning the T20 World Cup title has not been fulfilled yet. Kohli played the first edition of the T20 World Cup in 2012. Since then, Team India has reached the final once and the semi-final twice. But the team has to be out of the tournament by staying a few steps away from the title.