Australian Opener David Warner return to cricket, Warner has not played since the fourth Vodafone Test against India

He has been named in the New South Wales Blues for Marsh One-Day to face South Australia on 04 March in Adelaide.

David Warner has not played since the fourth Vodafone Test at the Gabba, where he was still hampered by the groin injury

He suffered in the second ODI against India at the SCG in November that forced him to miss the remainder of the limited-overs matches and the first two Tests.

Now the Left hander batsman is set to take the field in the day-night clash at the Adelaide Oval on 04 March (Thursday) in what will be his first 50-over match for the Blues since October 2019.

Warner comes in for Dan Hughes, who has hurt his shoulder, while Steve Smith will remain sidelined with an elbow injury. Nick Larkin will replace Smith in the one-day squad.

Pat Cummins will lead the Blues for the second time having starred in his first match as captain against Victoria at North Sydney Oval last month.

“We all know Davey’s quality as a player in all formats and it’s great to see him back for the Blues for this game,” said Blues coach Phil Jaques.

“He has worked really hard on his rehab and has been great around the group when he’s been at training.

“It will be fantastic to have his experience around the team over the coming weeks.”

Get Ashwin back in One Day International- Australian spinner Brad Hogg 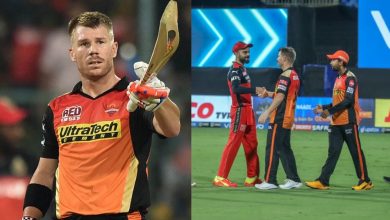 David Warner explained why they lost against RCB

David Warner said why they lost the match against KKR

David Warner the most valuable player of the IPL