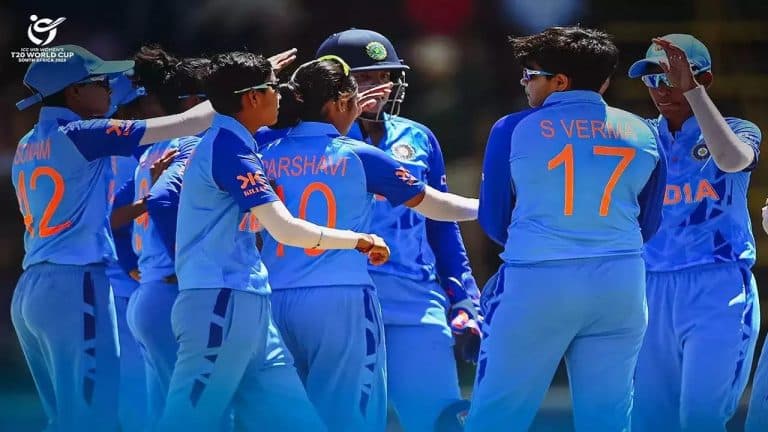 Potchefstroom: India got their campaign back on track in the Group I Super Six stage of the Women’s Under-19 T20 World Cup. With a resounding seven-wicket win over Sri Lanka on Sunday. After the seven-wicket defeat by Australia on Saturday. The bowlers of the team performed brilliantly and bundled out Sri Lanka for just 59 runs in the stipulated 20 overs. Sixteen-year-old leg-spinner Parshvi Chopra was the best of the Indian bowlers, taking four wickets. Left-arm spinner Mannat Kashyap took two wickets, both of which rattled the opposition’s batting line-up.

India again achieved this target in 7.2 overs. Although in the meantime the team lost the wickets of Shefali Verma, wicketkeeper Richa Ghosh and Shweta Sehrawat. Soumya Tiwari (28 not out) hit five fours in just 15 balls.

Earlier, India won the toss and decided to bowl and fast bowler Titas Sandhu dismissed Nethami Senaratna in the first three balls. Then the spinners soon took over and in no time the Sri Lankan team was in trouble. Only skipper Vishmi Gunaratne (25) and Umya Rathnayake (13) could reach double digits. The Indian bowlers, who were bowling tight. Did not give any chance to the rival batsmen to play strokes. And they gave only one run in the form of extra runs. Opening batsman and member of the Indian senior team. Shefali could manage just 15 runs and fell victim to off-spinner Devmi Vihanga, who took three wickets for India.