Yuzvendra Chahal made his 100th appearance in the competition when he took the field for RCB’s IPL 2021 season opener against the Mumbai Indians. Four RCB bowlers completed their full quota of overs in the game, with Chahal being the most expensive among the quartet, going wicketless while conceding 14 runs.

”Sometimes it’s about the good memories as well. Last year when Sunrisers Hyderabad played RCB, the match was going in favor of the former, and Jonny Bairstow was playing very well. Then Chahal came, took the wickets of both the set batsmen and the game turned completely. So those memories might help him get back to his prime form,” said Irfan Pathan.

Chahal is all set to feature in his 100th T20 for Royal Challengers Bangalore. The seasoned leg spinner was first roped in by Mumbai Indians in 2011, but he only played one match across three seasons before being recruited by RCB in 2014.

“I started in 2014 and I came from Mumbai Indians. That time I never thought that I’ll play 100 matches for RCB. So, yeah, it’s a very emotional journey,” Chahal told Mr. Nags.

Yuzvendra Chahal hilarious jibs at KL Rahul and Chris Gayle are doing round on social media. Chahal had trolled the PBKS players over their jersey color which resembles the Royal Challengers Banglore. Both the franchise same color uniforms-red, like many netizens.

He playing chess against three of his teammates, AB de Villiers, Mohammed Siraj, and Washington Sundar, at the same time. A picture shared on both Instagram and Twitter accounts. While sharing the picture’s caption Chahal gave a twist to the title of a popular period drama The Queen’s Gambit. He captioned his post “The King’s Gambit.” 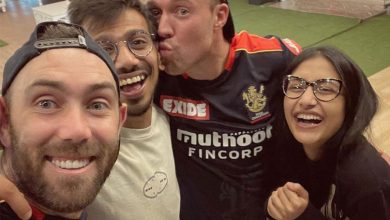